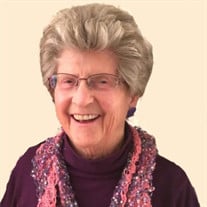 Agnes Corrigan peacefully left the world she loved so much on March 11, 2021, after 4 days in hospice care. Her family, including many nieces and nephews, had the opportunity to express their love and gratitude either in person or via video chat during those days. The youngest of 12, and the last of her generation, Agnes always valued family. She will be welcomed to Heaven by her husband Jack, her daughter Kathleen, her parents Henry and Blanche (Taylor) Schneider, her siblings: Ethel, Leo, Paul, Lucille, Henry Mark, Blanche, Dan, Lila, Emily, George, and Loretta Rose, along with all her in-laws and many friends. She will be missed by her remaining 6 children and their spouses; John (Gelen) Corrigan - Chesapeake, VA, Maureen (Paul) Simon - Manitowoc, Ann (Jerry) Fons - Waukesha; George (Tiffany) Corrigan - Stoughton, Jean (Bill) Schmitzer - Rice Lake, and Mary (Russell Martiens) Corrigan – Seattle, WA. She will also be missed by her 9 grandchildren and 2 great granddaughters: Scott (Christina Coronado) Corrigan – Syracuse, MY, Kimberly (Jordan) Guraya - Bethesda, MD, Camilla (Stuart) Hannig – Concord, CA, Mary (Luis Galimberti) Simon and daughter Jade - Whitefish Bay, Sarah Fons (Shane Crowley) - Cork, Ireland, Dan Fons and Andrew Fons - Waukesha, Soren (Talia Beebe) Poulsen and daughter Ella – Spokane, WA, and Dane Poulsen (Nicole Clay-Austin) – Seattle, WA. Agnes was born Nov. 1, 1927, grew up in Rice Lake WI, and received a BA in Philosophy from Marquette University. During high school and college, she enjoyed an amazing array of employment experiences: radio operator, factory worker alongside German POWs, waitress in tourist locations in CO, AZ, and WY. Her love of travel and adventure came from her siblings. She encountered a stunning variety of natural beauty and human characters, including opera and movie stars. Many of these are described in her funny and wry memoirs that her family looks forward to sharing! Through friends from Marquette, Agnes got to know fellow alumnus Jack Corrigan. Both were teaching in rural Wisconsin high schools at the beginning of their courtship, Agnes taught English, and Jack taught History. They were wed in 1954, at St. Joseph Catholic Church in Rice Lake, WI. Their married life began with them living at a Boy Scout Camp since Jack had switched careers. Scouting took them from Two Rivers, Wisconsin through Jacksonville, Illinois, and Bay City Michigan, before coming full circle to Manitowoc in 1967, where Jack began to practice law in 1971. Though Agnes was busy with 7 children she never stopped seeking knowledge and meaning in life. She was active in book clubs, community theater and the American Association of University Women. She took courses in theology, attended retreats, and corresponded with family and friends from all over the country. Together Agnes and Jack were active in their parish, bridge clubs and CFM (Christian Family Movement.) Life took a turn in 1974 when Jack suffered a fatal heart attack. Agnes was only 46, with children aged 9 to 18. Her faith, friends, and family carried her through that grief. The next year she began working as the first lay Director of Religious Education at St. Paul Parish in Manitowoc. Agnes prepared hundreds of children for the Sacraments and was active in local and state-wide organizations promoting lay ministry. Another chapter in her life began in 1984 when Agnes responded to God’s call to work with the vulnerable. She received a Master’s in Pastoral Ministry at Loyola of Chicago and was employed in the Milwaukee Archdiocese at St. Boniface, St. Elizabeth, and St. Gaul. She was instrumental in programs that supported marginalized women and families and created a program to bring literature and the arts to children at meal programs. She remained an active member at St. Martin de Porres. Her passion for social justice continued after she retired. Agnes remained active as an advocate for programs that helped to ‘level the playing field’ in many organizations such as Project Return, Table of the Saints, MICAH, and Interfaith. She participated in meetings, gave community presentations, contributed financially and showed up in person at marches, and rallies into her 90’s. Agnes shared her deep appreciation for arts, literature and travel with her family and friends. She took her children and grandchildren to plays, symphonies, and art museums; she read poetry; she gave gifts of wonderful books. Agnes rejoiced when her children and grandchildren traveled, loving to hear of the places and people they met. An older book that Agnes recently rediscovered is Honey, I Love by Eloise Greenfield. The title poem describes the simple things a child loves. Agnes loved travel, trees and theology, poetry, prose and politics, art, theater and music, and perhaps most of all, people. She delighted in the little things, laughing at the incongruities of life, and sharing that joy with those around her. The family is being served by Northwest Funeral Chapel. A funeral and celebration of life are planned at St. Martin de Porres Parish when it is safer for people to travel and gather.

Agnes Corrigan peacefully left the world she loved so much on March 11, 2021, after 4 days in hospice care. Her family, including many nieces and nephews, had the opportunity to express their love and gratitude either in person or via video... View Obituary & Service Information

The family of Mrs. Agnes Corrigan created this Life Tributes page to make it easy to share your memories.

Agnes Corrigan peacefully left the world she loved so much on...

Send flowers to the Corrigan family.