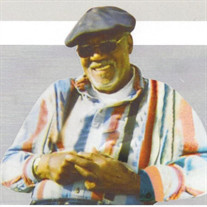 ALVIN S. HEGWOOD July 3, 1932 - December 13, 2021 Alvin S. Hegwood was born on July 3, 1932, in Union County, Arkansas to the union of Dee and Mary (McElroy) Hegwood. He was the youngest of four (4) sons born to this union. His formal education began in the Smackover, Arkansas Public School system. He graduated from Lincoln High School in Milwaukee, Wisconsin. Alvin continued his studies at the University of Wisconsin - Milwaukee before beginning his professional career. Alvin professed Jesus Christ as his LORD and Savior as a young man. He was united in Holy Matrimony to Gladys Louise (nee Davis) on April 15, 1951; from this union, five (5) sons were born - Alvin Lamont, Brian, Greyland, Gail, and Bruce. Alvin's professional life concluded with his retirement from Miller Brewing Company (now Miller-Coors) in 1991. His career path included owning and operating businesses, and certification as a Master Appraiser in the State of Wisconsin. Retirement never quenched his thirst for knowledge - he was an avid reader, and passionate about current events. He was a great influence on the young people in the neighborhood. He leaves to cherish his memory his sons Alvin Lamont (Sharon), Brian, Greyland (Brenda), and Gail. He was preceded in death by his three brothers, Jesse (Alice), John (Annie) and David (Nelsie), as well as by his adoring wife, Gladys, and his loving son, Bruce (Thelma). He was a proud grandfather and great-grandfather; he is further survived by a host of grandchildren and great-grandchildren, nieces, nephews, other relatives and friends. Alvin departed this life on December 13, 2021, to be reunited with his beloved wife. Indeed, to be absent from the body is to be present with the LORD.

The family of Mr. Alvin Hegwood created this Life Tributes page to make it easy to share your memories.

Send flowers to the Hegwood family.