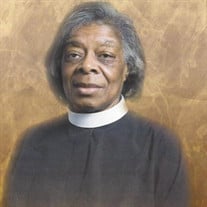 Elder Anesia McGee was born January 26, 1948, to the union of Eular and Mattie Williams. She received her formal education within the Milwaukee school system. She graduated from North Division High School in Milwaukee, Wisconsin. Anesia was raised in church and accepted Christ as her Savior at an early age. She united in holy matrimony with John McGee II for eleven years. Their union was blessed with four children. Anesia McGee worked as a Long Distance Operator for AT&T, and as a Laborer for the City of Milwaukee until her retirement. In her leisure, she enjoyed being with family, and serving the Lord by helping others and participating in church functions both locally and abroad. Anesia begin serving in the church as a child, singing in the choir and participating in church programs at Shiloh Tabernacle UHCA under the leadership of Pastor Lady Pitts on 9th and Galena. She served in the same capacity at Shiloh under the leadership of Pastor Dolly Barry through the church's move to 13th and Hopkins and finally to the current location at Port Washington Road. She began serving under the calling of Minister and then Evangelist under the leadership of Bishop Charles Jordan at Shiloh Tabernacle UHCA. She directed the Angel Choir; directed the youth Choir; and taught the Junior Sunday School Class. She participated in group door- to-door visits to family, friends, and neighbors to win souls to Christ. She began to serve under the calling of Elder under Pastor Clifford Pitts at New Covenant Temple UHCA. She was the Sunday School Superintendent, Angel Choir Director; Kingdom Community Builders Overseer; and sung in the Adult Choir. She continued to serve under the calling of Elder under the leadership of Pastor Billy Carson at New Covenant Temple UHCA. She was the Sunday school Superintendent and Trustee. Elder Anesia McGee was consistent and loyal in her serving. We could count on her showing up, being on time, and creating momentum. We also knew that anyone who came to her house would be invited to Christ. Elder McGee was preceded in death by her: father; Eular Williams; mother, Mattie Williams; two brothers, Delbert Williams, and Carl Jones; sister, Janice Parker; son, Christopher (Mikey) McGee; three grandchildren, Erica McGee, Justin McGee, and Duane Boothe. She leaves to cherish her memory: aunt, Bessie Williams; five sisters, Syronia Clark, Gloria Norman, Mary Norman, Candis Bridges, and Lisa Norman; three brothers, Mark Bridges, Steven Schultz, and Robert Williams; three children, John (Arnetta) McGee III, Yvonne McGee, and Eric (Jancita) McGee; bonus daughter/granddaughter, Natisha Shannon; grandchildren, Ranesha McGee, Jasmine Taylor, Monea McGee, Eric McGee Jr., and Damontre Boothe; along with a host of great-grandchildren, nieces, nephews, and cousins.

Elder Anesia McGee was born January 26, 1948, to the union of Eular and Mattie Williams. She received her formal education within the Milwaukee school system. She graduated from North Division High School in Milwaukee, Wisconsin. Anesia was... View Obituary & Service Information

The family of Mrs. Anesia McGee created this Life Tributes page to make it easy to share your memories.

Send flowers to the McGee family.