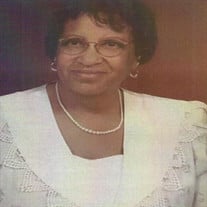 A Mother's love is like a circle, it has no beginning and no end. It keeps going round and round, ever expanding, touching everyone who comes in contact with it. Annie Bell Hunter was called home to rest by God, on March 15, 2021. Annie Bell Hunter Lived her Life to the fullest. She was exceptional at anything she did, and always strived to do her absolute best. She enjoyed crafting, sewing, cooking, traveling, gardening, shopping, and talking on the phone. Holidays were always amazing, because of all the love, planning, preparation, and decorating that she put into them. Annie Bell Hunter attended Mount Zion Missionary Baptist Church where she was an active member for over 40 years, and participated in Sunday School. Annie was the president of the Esther Missionary Circle, and led the group for many years. She also helped with the annual Thanksgiving dinners, and was responsible for the Friday night dinners. In addition she looked forward to attending the annual Women's Retreat in Green Lake, WI, as well the Baptist Convention. She was known for her quiet demeanor, but served and was faithful to any task given. Annie Bell was very active with her grand-children, as well her great-grand children. She also enjoyed spending time with them, and attending their school events. Annie Bell (Crayton) Hunter was born on October 23, 1936 in Mount Holly, Arkansas Kenny and Cora Lee Crayton. Annie Bell was the youngest of three children. She had two brothers Willie Lee Crayton, and Alexander Crayton She joined Union A.M.E. Church at a young age. She graduated from New Hope High School, located in Mount Holly, Arkansas in 1955. Annie Bell received an Associate Degree in Psychology from Shorter College, located in Little Rock Arkansas in 1957. The day after Annie Bell graduated from college, she relocated to Milwaukee, Wisconsin to Live with her brother Alexander, and sister-in-law Cassie. In Milwaukee, she met and married Julius Hunter. They were blessed with two children Gwendolyn Hunter, and Cary Hunter. Annie Bell began working at the Veteran Administration Hospital in 1962. She retired in 1998. Annie worked in the psychiatric healthcare field for 36 years. Annie Bell is preceded in death by her mother Cara Lee Crayton, her father Kenny Crayton, her brothers Willie Lee Crayton, Alexander Crayton, and her great grandson Joseph Maurice Downey Jr. Annie Bell is survived by her children Gwendolyn of Milwaukee, Wisconsin and Cary of Milwaukee, Wisconsin; her grandchildren Lauren-Aubree (also known as LeKesha) and her husband Rudolph of Rockford, Illinois, Kendra of Spring, Texas, and Cary Jr. of Milwaukee, Wisconsin; her great grandchildren Lekea of Milwaukee, Wisconsin, Xavier of Phoenix, Arizona, Trevon of Phoenix, Arizona, Maurice of Milwaukee, Wisconsin, Kennedy of Rockford, Illinois, Skylar of Rockford Illinois, Kendall-Joy of Rockford, Illinois, Cherish, of Germantown, Tennessee, Imari of Spring, Texas, Kiera of Spring, Texas, and Jerry of Spring, Texas, her sister-in- laws Cassie Crayton of Milwaukee, Wisconsin and Helene Crayton of Mount Holly Arkansas, and a host of nieces, nephews, and cousins.

A Mother's love is like a circle, it has no beginning and no end. It keeps going round and round, ever expanding, touching everyone who comes in contact with it. Annie Bell Hunter was called home to rest by God, on March 15, 2021. Annie Bell... View Obituary & Service Information

The family of Ms. Annie Bell Hunter created this Life Tributes page to make it easy to share your memories.

Send flowers to the Hunter family.