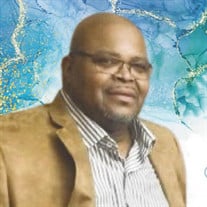 Antonio T. Jarrett, Sr. was born on July 9, 1967 to the union of Lillie and John Bender in Chicago, Illinois. He received his formal education at South Division High School in Milwaukee, Wisconsin. On August 6, 1994, Antonio "Tony" Jarrett, Sr. united in holy matrimony with Gail Jarrett in Milwaukee, Wisconsin. Their union was blessed with two children. He was employed by Helwig Carbon Technology as an Associate 3 for 26 months. In his leisure, he enjoyed spending time with his family and loved ones. He dabbled in golfing, softball, and bowling. He prided himself in being his daughter's biggest coach, and was a mentor to many. Antonio T. Jarrett, Sr. departed this life on February 6, 2022. He was preceded in death by grandmother, Mattie Nicholson. He leaves to cherish his memory: wife, Gail Jarrett; children, Ciara Jarrett, and Antonio Jarrett, Jr.: mother, Lillie Bender; father, John Bender; three grandsons, Zachary Strayhorn, Jr.. Jaedyn Jarrett, and Malcolm Woods; along with a host of aunts, uncles, cousins, and friends.

The family of Mr. Antonio T. Jarrett Sr. created this Life Tributes page to make it easy to share your memories.

Send flowers to the Jarrett family.