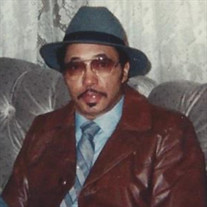 Arthur "Scoop" Leflore was born in Goodman, Mississippi on December 23, 1937 to Larcine and Lincoln Leflore Sr. At an early age, he committed his life to Christ at Walden Chapel United Methodist Church in Goodman, MS. He was even part of a Christian singing group hat frequently performed on Goodman's local radio station. Arthur's early days were also spent attending Goodman Elementary school and helping his mother in the hot Mississippi cotton fields. Although he wasn't much help - he often chose to lay down in the fields and nap instead. As a young adult, Arthur moved from his hometown to' Milwaukee, WI in 1956 after leaving the Air Force. Arthur Leflore was a hardworking man. Some e· his past jobs included being a mail carrier, truck driver, janitor at Holmes Junior College, working in laundry facilities at St. Luke's Hospital, and even worked in a tannery for a day (he didn't like the smell). But the job he loved the most and retired from after 42 years was being a Machine Ope rater at Navistar {previously known as International Harvester). When speaking about his hard work ethic, he would always say, "if you work, you can get what you want. If you don't, you gotta wait until somebody give it to you". His words of wisdom continue to resonate. Arthur carried fend memories of his large family including his 11 brothers and 5 sisters. He met his wife, Emma R. Leflore on October 17, 1976 and quickly fell in love. They were married on January 7, 1987. Together they share 9 children, 27 grandchildren, 32 great-grandchildren and 9 great-great grandchildren. Arthur lived a full and happy life. He became a Prince Hall Mason {Ashley Lodge) in 1981 and was a proud 32nd degree Mason and Shriner. Some of his personal interests included playing the Blues on his guitars, collecting cars, watching the news, taking naps, and making everyone laugh by sharing entertaining stories from his life. His journey on this Earth ended on Thursday, November 11, 2021 at the age of 83 ("37" if you asked him!). Arthur is preceded in death by his parents Larcine and Lincoln LeFlore Sr, siblings Ada Leflore, Bertha Mae Landfair, and West (Classie Mae) Groves of Goodman, MS, Albertine "Alice" (Earl) Chaplin, Wesley "John" LeFlore, and R L "Reb" (Stella) Leflore, of Milwaukee, WI. Robert Louis (Ollie) LeFlouria of Ypsilanti, MI, Lincoln (Posey) Leflore Jr. of Stanton TN. Joe (Linda) leflore, Howard (Gail) Leflore of Waterloo, IA Annette (Larry) Sproles of Olathe, KS, and granddaughter Angela Leflore of Milwaukee, WI. He is survived by his children Thelmon Brown (Elzy Myles), Arthur (Dorothy King) Leflore Jr, Dora Banks (Tyrone Hernandez), Rickey (Rosa Washington-Cox) Cox Sr., Stacy (Marvin) Weaver, and Shacurra Leflore of Milwaukee, WI. Patricia Cox-Collier of Jackson, MS, Earnest (Davion) Sanford of Oakley CA, and Degail Sanford of Bay Point, CA Siblings Theopollis "Ted" (Tedella) Wilder, Lammie "Maine" (Juanita) Leflore, Charlie (Rachel) Leflore, and Mariah (Esly) Gray of Milwaukee, WI, Alfred Leflore of Waterloo, IA, grandchildren, great-grandchildren, great-great grandchildren, a host of nieces, nephews, family, and friends.

Arthur "Scoop" Leflore was born in Goodman, Mississippi on December 23, 1937 to Larcine and Lincoln Leflore Sr. At an early age, he committed his life to Christ at Walden Chapel United Methodist Church in Goodman, MS. He was even part of a... View Obituary & Service Information

The family of Mr. Arthur Leflore created this Life Tributes page to make it easy to share your memories.

Arthur &quot;Scoop&quot; Leflore was born in Goodman, Mississippi on December...

Send flowers to the Leflore family.