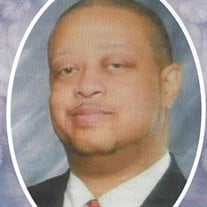 Avery F. Harris was born on November 30th, 1959, to the union of Albert P. Harris and Dorethia (Graves) Harris in Milwaukee, Wisconsin. Avery F. Harris received his formal education within the Milwaukee Public School System, attending Garden Homes Elementary, Rufus King Hiqh School. home of "The Generals," graduating "Class of 1977." Avery attended Milwaukee Area Technical College graduating with a degree in Computer Programming in 1979. Avery accepted Jesus Christ as his Savior as an adult. being Baptized at New Testament Church in Milwaukee, Wisconsin. New Testament Church was his home church under the leadership of Pastor Julius R. Malone. On August 29, 1987, Avery F. Harris united in holy matrimony with Sherelle Lucas at Trinity Lutheran Church in Milwaukee, Wisconsin. Avery and Sherelle were blessed to have her older brother Reverend Glenn A Lucas officiate the wedding ceremony. Their marriage was the first marriage Reverend Glenn had officiated and it remained strong by the grace of God until Avery's death. Avery was employed by Northwestern Mutual as a Senior Systems Engineer for twenty-five years looking forward to retiring in January of 2022. Avery was a dedicated employee and truly enjoyed his profession, often teasing his wife that after he retired, he would go back to work as a contractor 'or Northwestern Mutual. Avery was respected and well-liked by all his coworkers past and present. developing lifelong friendships. Avery's love for his family always put Sherelle, Jessica and Justin ahead of everyone else. Avery worked early hours so he could be at his children's school activities whether it was a school play, choir event, or sports competition Avery was there. Avery believed in spending as much time as possible with his family, bonding with them during game nights teaching his children to play chess, dominos card games ping pong, board games among other games. Avery supported Sherelle when she coached basketball and volleyball for over fifteen years by going to most of the games she coached. They also enjoyed playing Yahtzee and Word Feud daily the competition was tough. His selfless acts of support gave his family cherished memories to hold on to for the rest of their lives. In his leisure, he enjoyed bowling when he could. Avery began bowling as a youth joining leagues with some of his lifelong friends. These friends would soon be known as the Chargers, they also played baseball, tennis, chess, ping pong and the all-time favorite board game Risk, this board game would last into the wee hours of the morning. These fellas have remained friends for decades, some for as many as so 50+ years supporting one another through life's ups and downs. Avery enjoyed taking walks, bicycling and being the handyman around the house fixing anything and everything first learning by reading books and then using this wonderful new technology app called You Tube to watch how to fix everything. Avery was a Brewers fan, and a Bucks fan, BUT everyone knew where to find Avery every Sunday, in front of the TV watching his # 1 football team the Green Bay Packers! Sherelle was banned from watching the games because he thought her watching the game made them lose. After Brett Favre won them, the Super Bowl Sherelle was allowed to watch football with him. It was that serious! Avery F. Harris departed this life on Sunday September 26th, 2021. He was preceded in death by his father. Albert P. Harris April 10th, 2011, and his mother. Dorethia Harris September 4th 2021. Avery leaves to cherish his memory loving wife, Sherelle Harris; two children, Jessica N. Perceptions (Christopher) & Justin Avery Harris; one granddaughter, Christina; and one unborn granddaughter, Charlotte Perceptions; one brother, Rodney Wade Harris; nephew, DeMarcus; uncles, Dr. Walter Gene Harris (Claudia), George Graves (Marie), and James Harrison (Dorothy); aunts, Barbara Price, and Mattie Bell; and a host of nieces, nephews, cousins, and friends.

The family of Mr. Avery Farrell Harris created this Life Tributes page to make it easy to share your memories.

Send flowers to the Harris family.