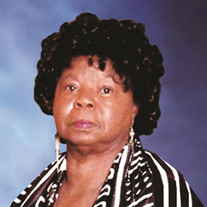 May the Work I’ve Done, Speak for Me . . . Bernyce Washington Rivers (Affectionately known as Mother Rivers) Life is but a living day, a time to work and a time to play, and then comes death! The essence of a life well-lived, one worth celebrating and remembering, is the ability to care for and share with others. On March 31, 1930, heaven graciously entrusted us with Bernyce Washington Rivers in Memphis, Tennessee, to the proud parents Walter Washington and Louella Holman Washington. To this union, two children were born – Bernyce and Florence. Both parents and sister Florence preceded her in death. On February 19, 2021, at 11:38 a.m. at Columbia St. Mary’s Hospital/Ozaukee, Bernyce returned to her heavenly home. During her 90 year tenure, she touched numerous lives with her graceful style and stern persona. She was the epitome of a lady, but she didn’t shy from correction. Bernyce accepted Christ at an early age at Mt. Gilliam Missionary Baptist Church, located in the Orange Mound Community of Memphis, Tennessee. She was a faithful and dedicated member under the leadership of Pastor Eugene Bates. Bernyce received her formal education at Melrose High School (Golden Wildcats) in Memphis, Tennessee. She attended and supported all of the Mass Reunions, which took place every other year. Upon graduating from high school, she furthered her education at Lincoln University – Jefferson City, Missouri – where she received a Bachelor of Science Degree in Elementary Education, with a double major in English and Math. She was known as a prolific writer and thinker. Eager to start her career, she began working as an educator in the Memphis Public School System for ten years. In 1954, Bernyce and her high school sweetheart, Charles Rivers, were united in holy matrimony and later moved to Milwaukee, Wisconsin. Their union was blessed with one son – Robert Rivers, who preceded her in death, as did Charles. As Bernyce continued to climb the ladder of success, she was employed by Milwaukee Public Schools as an English Teacher for 38 years. During the late 1960’s, while working at Robert Fulton Junior High, Bernyce, along with Jeanette Bryant, were instrumental in removing barriers in hiring African American cooks in the MPS system. Thirty-four of her MPS years were spent at Fritsche Middle School. She was affectionately known as Mother Rivers. Mother Rivers became an icon working with students and staff that she loved dearly. She remained at Fritsche Middle School until her retirement in 2002. She had a passion for education and always motivated her students to do their best, work hard and never give up. She wore many hats, including Director of the Independent Learning Center (ILC), African Dance, Drill Team, Gospel Choir, and Coordinator of the Ethnic Festival (bringing all cultures together). One of the highlights of her career was presenting a production which everyone enjoyed. Being a member of the New Life Presbyterian Church (New Dawn Worship Center), she knew she had found her place in helping others in the community. She competed and participated every year to bring family and friends together. There is a plaque given in her honor each year to the hardest worker. We will miss her energizing effort preparing Thanksgiving baskets for family and friends. She enjoyed working with the various ministries under the leadership of Rev. Dr. Terrell H. Cistrunk. Mother Rivers was a proud member of Sigma Gamma Rho Sorority Inc., National Association for the Advancement of Colored People (NAACP), National Education Association (NEA), National Council of Teachers of English (NCTE), and Metropolitan Milwaukee Alliance of Black School Educators (MMABSE). She loved corresponding with all of her beloved family members, prayer partners such as Mary Stark, and extended family. She loved to travel the United States and abroad. She supported many organizations and charities in the U.S. and Africa, including Feed the Children, St. Jude Research Hospital, Historically Black Colleges and Universities, Tuskegee Airmen – Red Tails, and Shriners Hospital for Children. She always reminded others “It is more blessed to give than to receive.” Mother Rivers was blessed with numerous Godchildren, nephews and nieces. She had a special bond with Taniya Chebre Lewis. As their relationship grew, Taniya affectionately called her “Granny”. Mother Rivers was always supporting her throughout her college years. She was the joy of her life. There are special memories of caring and sharing with sisters Geraldine and Lillie of Memphis, Tennessee. Two sister-in-laws – Virginia Williams, Milwaukee, Wisconsin, and Ora Lee Rivers of O’Fallon, Illinois, who were very attentive. During her final weeks of hospitalization, she was able to rely on her many friends and family, including Thelma Chancellor, Maxie Addison, Sue Saller, and Linda McLaurin. She lived her life well and to its fullest. She loved life dearly, and family wholeheartedly and unequivocally, her friends, co-workers and extended family. She had a way with words and a way with life. She did it her way!

May the Work I&#8217;ve Done, Speak for Me . . . Bernyce Washington Rivers (Affectionately known as Mother Rivers) Life is but a living day, a time to work and a time to play, and then comes death! The essence of a life well-lived, one worth... View Obituary & Service Information

Send flowers to the Rivers family.