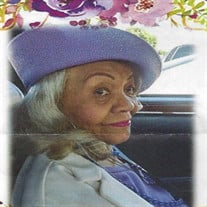 Bessie Louise Lynch was born May 1, 1933 in Jackson, TN to the union of Dewitt and Alberta Bowers. Bessie Louise Bowers was united in holy matrimony to Mr. Joseph Lynch on January 26, 1958 in Milwaukee, WI. Their union was blessed with three daughters and one son. Bessie accepted Christ as her Savior at an early age and was baptized at St. Paul Methodist Church in Jackson, TN. She became a member of St. Mark AME Church and after having a child attend St. Philips School, she and Joseph became members of st. Philips Ev. Lutheran Church over 50 years ago. She graduated from Lincoln High School In Milwaukee, WI. Bessie received an Associate Degree in Nursing from MATC and a Bachelor of Science Degree in Nursing (BSN) from Alverno College. She worked as a nurse for over 30 years. She was employed by Milwaukee County Medical Complex, her favorite job, as a kidney transplant nurse clinician. She became a Parish nurse in her later years at St. Philips Church until her death. Bessie's memberships included the Black Nurses Association, American Nursing Association, Christian and Business Women Organization, and 50-plus Women's Bible study group. One of her passions was life-long learning. In Bessie's own unique way, she shared her knowledge, her experiences, and her Godly wisdom with many people. She enjoyed reading, listened to all genres of music, attending the symphony, and talking! Bessie entered into eternal rest on March 3, 2021. She leaves behind to cherish her memory, her beloved children: Cynthia (Edward)Wilnner, Joseph (Ofelia)lynch Jr., Gracie Carter, Susan (Steven) Bacon, grandchildren Charles Jr., Carmen, Chacon, Ashanta, Domneik, Nikki, Naomi, Kaitlyn, Justin, and great grandchildren Jazmin, Jerrick, Marckus, Kayden, Zariah, Mahonony, McMillian, Chabreaha, four great-great grandchildren, and a host of relatives and many dear friends. She was preceded in death by her loving husband Joseph Lynch Sr., her sister Rose St. John, and parents Dewitt & Alberta Bowers.

Bessie Louise Lynch was born May 1, 1933 in Jackson, TN to the union of Dewitt and Alberta Bowers. Bessie Louise Bowers was united in holy matrimony to Mr. Joseph Lynch on January 26, 1958 in Milwaukee, WI. Their union was blessed with three... View Obituary & Service Information

The family of Mrs. Bessie L. Lynch created this Life Tributes page to make it easy to share your memories.

Send flowers to the Lynch family.