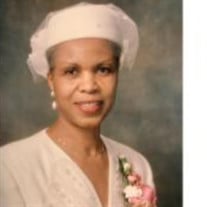 Betty Lee Webb, was born on July 03, 1940, in Sardis, Mississippi to the union of Essie Nelson, Sr.and Ada Mae Hibbler-Nelson. Betty was the fourth of twelve children blessed to this union. Betty accepted Christ at an early age and was baptised at twelve years old. Betty attended grammar school in Sardis, Mississippi where she was taught by her Aunt Jonnie at Zion Hill, a small one room school house. She earned her high school diploma from South Panola Vocational High School in Batesville, Mississippi. While attending Coahoman Junior College in Clarksdale, MS, Betty was crowned Homecoming Queen by her peers. She went on to receive her teaching degree with the help of her aunt Jonnie from Rust College. She was a substitute teacher at North Ponola High School. Higher education was important to Betty. She received her masters in social work from Governor’s State in Chicago, IL. Betty Webb was united in holy matrimony to Walker James Webb who proceeded her in death. The union was blessed with one child, their son, Stanley Webb. Betty was the kindest most caring person that you could have ever met. She enjoyed working, her family, and friends and went out of her way to ensure that everyone was taken care of. It is no wonder that she chose a career in social work. She worked as a Human Services Specialist with the City of Chicago for 51 years. She also enjoyed the theater and chose a second job at the Goodman Theater. She spoke often of the plays that she’d seen and the cast parties she attended. Relaxing in the evening she enjoyed television. Her favorites were westerns, Law and Order SVU, Let’s Make a Deal, Price is Right, any judge show, and the Cooking Channel. Betty Webb departed this life Tuesday, November 16, 2021 with her loving son by her side in Glendale, WI. Preceding Betty in death were her parents, Essie and Ada Mae Nelson; her sisters, Julia White and Georgia Nelson; brothers, W.C. Franklin and Roy Nelson; and grandson Tyler Webb. Betty leaves behind to cherish her memory her dear son, Stanley (Sharyne) Webb of Glendale, WI; granddaughters Jasmin Webb of Chicago, IL and Ariel Elise Webb of Tucson, AZ; great grandchildren Mariah Webb, Jeremiah Lee Mills, and Mesiah Mills; brothers, Essie (Gloria) Nelson Jr. of Milwaukee, WI Charles (Andrea) Nelson Sr. of Leigh Acres, FL and Will (Hattie) Nelson Sr. of Memphis, TN; sisters Amogene (Leroy) Presley of Alsip, IL, Bessie (Roy) Madison of Tinley Park, IL, Dorothy White of Dolton, IL and Hattie Jones of Memphis, TN; two aunts Fannie Lewis and Mary Dunnigan, of Chicago IL; brother-in-law and sister-in law Erones and Doris Webb of Chicago, IL, sister-in-law Edna “Micky” Webb of Chicago, IL; and a host of cousins, nieces, and nephews.

Betty Lee Webb, was born on July 03, 1940, in Sardis, Mississippi to the union of Essie Nelson, Sr.and Ada Mae Hibbler-Nelson. Betty was the fourth of twelve children blessed to this union. Betty accepted Christ at an early age and was baptised... View Obituary & Service Information

Send flowers to the Webb family.