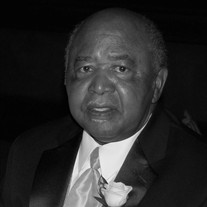 Bezelee Martin was born on September 29, 1932, to the union of Tom Martin Sr. and Ruth Mae Hall Martin in Gould, Arkansas. His family moved to Boley, Oklahoma and he received his early education in the Boley Public School System. Bezelee accepted Christ at an early age and as a child he was a member of Ward Chapel AME Church in Boley where faith, perseverance, self-confidence, hard work, commitment to family, and service to others were fostered in a Christian home environment. After moving to Milwaukee, Wisconsin in 1947, he became a member of Tabernacle Community Baptist Church where he was an active member of the Choir. It was at Tabernacle Community Baptist Church that Bezelee would meet the love of his life, Lena Mae Newell. Bezelee and Lena were married on June 25,1960, at Tabernacle Baptist Church and to this union four sons were born. Exposure to Black entrepreneurs from having been raised in Boley, OK, one of the most prominent Black towns in the early 20th century, influenced Bezelee for the rest of his life. Bezelee started several businesses during his adolescence including lawn services and concession stands. After moving to Milwaukee, WI and working various jobs, the entrepreneurial spirit nurtured in Boley, OK lead to the start of several businesses in the 1950's including Martin Hosiery, Martin Wholesale Grocery, and Martin Trucking. In 1965, Bezelee started Lena's Food Market and this business remained a staple on the Northside of Milwaukee for over 50 years. At one time Lena's was operating over 6 locations with greater than 600 employees. In 1969, Bezelee started Black Gem Brands, a line of canned vegetable and other household products that were sold in 8 Mid-western states. Companies founded by Bezelee have won many awards including, but not limited to, the United States Department of Commerce Minority Retailer of the Year and Wisconsin Minority Business of the Year. Bezelee was interviewed for inclusion in The History Makers National Digital Archive in area of business. In addition, Bezelee's family business has been included in the Miller Brewing Company Gallery of Greats. In 2013, he was recognized for his 60 plus years of business success and was inducted into the Wisconsin Business Hall of Fame. Bezelee, affectionately known as Bez, enjoyed fishing, traveling, investing, and providing personal and professional guidance. He is cherished as a loving husband, father, and grandfather. Bezelee Martin departed this life on Tuesday, July 27, 2021, in Mequon, WI. Preceding him in death are his parents, Tom and Ruth Mae Martin, siblings Bob Ollie Martin, Cyrus Martin, Mary Helen Burley, Cleophus Martin, Charles Martin, Lue Lee Tomlin, Samuel Martin, and Tom Martin, Jr. Bezelee Martin leaves to embrace his spirit and mourn his loss: his devoted wife, Lena; his four sons, Eric Charles Martin of Chicago, IL, Anthony (Sabrina) Martin of Milwaukee, WI; Derrick Carnell Martin of Milwaukee, WI, and Gregory (LuVerda) Martin of Mequon, WI; eight grandchildren, Anthony Justin, Ashley Alexandria, Halle Miranda, Alaya Niko, Alexis Alena, Gabrielle Lena, Blair Wanda, and Lindsey Priscilla. Also left to cherish his memory are his brother, Bruce (Tamara) Martin of River Hills, WI and sisters Clemmytine Lyday of Upland, CA, Alice Duke of Oklahoma City, OK, and sister-in-law Laura Newell, Southhaven, MS. He also leaves to celebrate his life a host of cousins, nieces, nephews, and beloved friends.

Bezelee Martin was born on September 29, 1932, to the union of Tom Martin Sr. and Ruth Mae Hall Martin in Gould, Arkansas. His family moved to Boley, Oklahoma and he received his early education in the Boley Public School System. Bezelee accepted... View Obituary & Service Information

Send flowers to the Martin family.