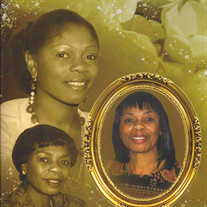 Bobbie Ann Smith was born on December 23, 1945 to the Late Lottie M. Smith In Jackson, MS. She received Christ at an early age. Bobbie received her formal education in the Milwaukee Public School System graduating from Lincoln High School. Bobbie went on to Milwaukee Area Technical College and received her Associates Degree in Respiratory Therapy with a concentration in Neonatology. Bobbie served in the Health Care Field for nearly 45 years. Starting out as a Nurse's Aide at 17 and retiring as a Supervisor in the Respiratory Therapy Department. Bobbie loved all her patients, but her passion was with the babies. To see Bobbie work on and with those babies, helping their tiny bodies breathe with those big machines with all the tubes, would send you into amazement! Bobbie was an active member of The National Board for Respiratory Care. In her leisure Bobbie enjoyed spending quality time with her family, especially her grands and greats! Organizing and attending family events great or small was her thing, because it was picture and party time! She was the photographer and dancing machine all at the same time! Her daughter calls her the "Keeper of the Memories" because of the thousands of pictures she has dating before Bobbie was even born. Her Birthday, Christmas and New Year's Eve were her favorite holidays. She would set up MuDear's basement and it would be going down from December 23rd to January 2nd! Bobbie was a master at everything she did. From sewing, crocheting, knitting and re- upholstering to building cabinets and walls to having the best garden, flowers and yard on the block! (And you better not even think of walking on her grass!) Bobbie enjoyed her trips to Vegas and Mexico with her BFF Gail. To say that Bobbie was a sports fan would be an understatement! She loved watching, attending and cheering for any of the Bucks, Brewers or Packers game in full gear head to toe! It was a weekly date for her, Simie and the Y Not II and Park East Crews. Bobbie Ann Smith received her Crown of Glory on December 14, 2021. She was preceded in death by her son Jeremy S. Fein, Her Fiance' Simie Fein, her mother Lottie M. Smith and her brother Alfred E. Smith Sr. She leaves to cherish her memory: Her only loving Daughter Dina (Lerone) Chapple; 3 Grandchildren Brettney (Roni) Thompson of Milwaukee, WI, Brenden Thompson of Fond Du Lac, WI and Bre-Ann (Montrel) Dunlap of Bremerton, WA; 5 Sisters Lottie J. Smith, Frances Lawrence, LaVonne Hodges, Patricia Cunningham and Brenda (Jeffrey) Goodrum of Milwaukee, WI; 2 Great-Granddaughters' Michelle and Brielle Dunlap of Bremerton, WA; God-Daughter Donya Coleman; 2 Special Daughters J. Michelle Bynum and Sheila Johnson; 2 Special Granddaughters Andrea Smith-Lewis and LaKeisha Tillery; 3 Special Great-Grandchildren Nyla Washington, JaCobe' Cocroft and Ty'on Jones of Milwaukee, WI; Uncle Joe L. Smith of Jackson, MS and a host of nieces, nephews, family and friends.

The family of Ms. Bobbie Ann Smith created this Life Tributes page to make it easy to share your memories.