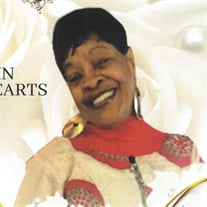 Brenda Fate Jefferson (affectionately known as the original "G- momma and GG") was born on April 7, 1950 to Ella Mae Martin and John T. McAdory in Kosciusko, Mississippi. She later moved to St, Louis, Missouri as a child with her mother where she completed her formal education at Beaumont High School. In 1973, Brenda relocated to Milwaukee, WI where she started her life journey. Brenda accepted Christ as her lord and savior at an early age. She later joined Christ the King Baptist Church in Milwaukee, WI., where she was a faithful member and served as a member of the nursery ministry until the start of the pandemic. On April 6, 1979, Brenda was united in holy matrimony with James L. Jefferson Sr. and they were blessed with three children, two daughters Tijuana and Kimberly and one son James Jr. Brenda enjoyed providing for her children and grandchildren. She made sure they would not have to work as hard as she did. She retired from Novozymes BioAg in April of2016 where she worked for 36 years as a machine operator. Brenda made many friends during those years and some she referred to as her family. Brenda loved being a provider for her extended family, younger brothers and her grandchildren. She took pride in caring for and spending time with her family and friends. She never met a stranger and was a joy to be around. There were many lessons that she taught us but the most important lesson was to love GOD and be yourself. She also enjoyed watching "her" Green Bay Packers, playing candy crush, visiting local farmer's markets, cooking big meals and laughing with her children and grandchildren.The one thing about her was, she was quick with her comebacks and made us laugh often. She was our very own comedian. Brenda peacefully departed this life on September 17,2021 and will be remembered as a loving and caring mom, grandmother, great grandmother, sister, aunt, cousin and friend. Brenda was loved and admired by many and will be deeply missed. Brenda was preceded in death by her husband, James 1. Jefferson Sr., parents, Ella Mae Martin and John T. McAdory Sr., her grandson, Jahlin R. Lopez-Jefferson, her sisters: Ruby L. Martin and Brenda J. Williams, and her brothers: Leroy Williams and Everett D. Martin, and along with a host of other loved ones. Brenda leaves to cherish her memory: her daughters: Tijuana, Kimberly (James), and Patricia (step-daughter); sons: James Jr. and Maurice (step-son); grandchildren: Rocher, Chardonnae (Christopher), Chauntel, Rokesha, Joshua, Kylee, London, Iesha and Brian and her great-grandchildren: Christopher, Kennedi, Caleb, Rylee, Maddox, Chloe, Jaicee and Caiden, brothers: Leon, Johnny, Michael (Queda), brother in law: lawyer Jr., sister in law: Mary Ruth and a host of nieces, nephews and other loving relatives and friends.

Brenda Fate Jefferson (affectionately known as the original "G- momma and GG") was born on April 7, 1950 to Ella Mae Martin and John T. McAdory in Kosciusko, Mississippi. She later moved to St, Louis, Missouri as a child with her mother where... View Obituary & Service Information

The family of Mrs. Brenda Fate Jefferson created this Life Tributes page to make it easy to share your memories.

Send flowers to the Jefferson family.