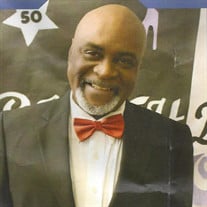 Charles Harvey was born on January 24, 1955 to Walter Francis Harvey Sr. and Johnnie Bernice Harvey (Wilder) at Cook County General Hospital in Chicago, Illinois. He was the oldest of five siblings born to this union and named after his paternal grandfather. Charles loved music and sports. He led his own band, Stone Variations at the age of 14 and played lead guitar while also singing vocals. Stone Variations was managed by his mother, Mrs. Harvey. Stone Variations experienced success and could be seen on WVTV, channel 18 on the Grapevine show, and at local night spots in Milwaukee, Beloit, Racine and Waukegan, Illinois. Charles was very creative and would design and build the stage sets and stage lights himself. His love of the guitar was inspired by the late Jimmie Hendrix and Ernie Isley. He also displayed his creativity and craftsmanship by building a TV stand, his masssive train set, and assisting with decorating the church as a member of Parklawn's Beautification Committee for special events. Charles attended Messmer High School and Rufus King High School in Milwaukee where he was an academic athlete on the honor roll, played varsity football as a defensive back and running back and was a member of the wrestling team. He went to state and won many medals, awards and numerous academic and athletic scholarships. While growing up on 12th Street, Charles was known for protecting his siblings and other younger kids in the neighborhood. Charles would often check on friends and family members to make sure that they were okay. He continued to display his creativity and craftsmanship by building furniture and painting other people's homes, while continuing to make improvements. He was such a kindhearted and friendly person who was always willing to help others. Charles loved to dress up and would often have a hat and shoes matching his suit. Charles Harvey was preceded in death by both of his parents. He leaves to mourn his passing three brothers: Michael Harvey, Reginald Harvey, Sr. Walter (Judy) Harvey, Jr., all of Milwaukee, Wisconsin; one sister: Karon (James) Cunningham of Spring Lake Park, Minnesota; his only child: Sheldon (Tameka) Bradford, Sr.; one maternal aunt: Gertrude Branch; six grandchildren, three great-grandchildren, a host of cousins, relatives and friends.

Charles Harvey was born on January 24, 1955 to Walter Francis Harvey Sr. and Johnnie Bernice Harvey (Wilder) at Cook County General Hospital in Chicago, Illinois. He was the oldest of five siblings born to this union and named after his paternal... View Obituary & Service Information

The family of Mr. Charles Harvey created this Life Tributes page to make it easy to share your memories.

Send flowers to the Harvey family.