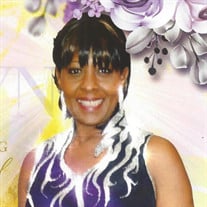 On December 4, 1957, Mamie L. Hodges welcomed "Lyn" into the world in Memphis, TN. Lyn was reared by her loving grandparents, Josephine and Joseph Harris while her Mom attended Tennessee State University in Nashville, TN. At the tender age of seven, Mamie and Lyn relocated to Milwaukee, Wisconsin. Lyn attended Milwaukee Public Schools, including Benjamin Franklin and Auer Avenue Elementary, Parkman Jr. High School and graduated from West Division High School at the age of 16. In 1972, She was crowned Miss Black Teen Wisconsin and with that title, traveled to several states to promote her platform of Beauty Inside and Out. Lyn briefly attended Milwaukee Area Technical College and the University of Wisconsin - Milwaukee but quickly learned that she was not college material and settled into a career with Kalmbach Publishing Co., where she began as the Receptionist and with mentoring and continuing education, she eventually became the Corporate Credit Manager. After a 20+ year career with Kalmbach, Lyn used her publishing and printing connections to move her career forward as an Account Manager with RR Donnelley and later with Quad Graphics. Lyn married her high school sweetheart, Edward "Eddie" Williams in 1983. Their union was blessed with two children; Shelby Lyn and Edward Anthony "Tony" Williams. Lyn loved and adored her six grandchildren: Grant D'Avondre, Braelyn Gabriel, Jailyn Renee, Jordyn Elise, Chase Anthony and Cameron Scott. , Lyn united with Christ The King Baptist Church in 2000 and serve in leadership roles, including: Seeds To Grow By Ministry and the Timothy Ministry. There, her passion for sharing the good news of Christ was exemplified as she welcomed new members into the body of Christ. Lyn was renamed as "Sister Sparkle", as you were sure to see something sparkle in her attire each Sunday. Proceeding Lyn in passing are her loving grandparents, Josephine and Joseph Harris; mother, Mamie L. Hodges and brother, Benjamin F. Blakey. Lyn leaves to cherish her memory, children: Shelby Williams and Tony Williams; grandchildren; brothers: Stacey (of San Francisco, CA) and Tracey (of Anchorage, AK); sisters: Sheila and LaTonia (of MD); two God-sisters: Tennita Clark and Fran Burks; close friends: Pamela Bell and Linda Henderson, and a host of cousins, nieces, nephews, ~ loving friends and associates.

On December 4, 1957, Mamie L. Hodges welcomed "Lyn" into the world in Memphis, TN. Lyn was reared by her loving grandparents, Josephine and Joseph Harris while her Mom attended Tennessee State University in Nashville, TN. At the tender age... View Obituary & Service Information

The family of Mrs. Cherlyn Lynn Carlyle created this Life Tributes page to make it easy to share your memories.

Send flowers to the Carlyle family.