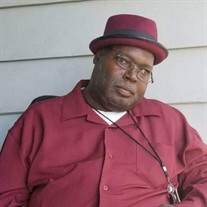 Chris Anthony "Antee" Henderson was born August 22, 1965, to the union of Mary Lizzie Henderson (Adams) and Jessie Julius Henderson in Louisville, KY. Chris spent most of his childhood in Milwaukee, WI. Chris accepted Christ at an early age and was a member of Peace Lutheran Church. Chris received his formal education within the Milwaukee Public School System, where he attended Pulaski High School. After high school, Chris worked as a general laborer. However there was nothing general about Chris. He loved to dress and was rarely caught in jeans. You could always count on Chris to be the life of the room, because he never let a good joke go untold. Chris was a fierce protector of family and a light to all who had the privilege of knowing and loving him. He always had a smile on his face. He loved music and watching wrestling (WWF) and enjoyed sharing his love of both with his children. There was nothing more important to Chris than his kids. Watching him with them through the years was all the proof one needed, to know what he treasured most. Chris, 55, transitioned from this life on Monday, March 29, 2021 . He was preceded in death by his grandfather, Earnest Adams; grandmother, Emily Adams; and father, Jessie J. Henderson. He leaves to cherish his memory: mother, Mary Henderson; siblings, Julius and Nichole Henderson; children, Marquise Henderson, Tynisha (Vincent) Martin, and Latesha and Jacquell Henderson; grandchildren, Vincent W. and Vinten W. Martin, Marquise Jr.. Navar Thomas, Aniyah Henderson, Kimira Lewis, and Gabrielle and Jayla Nash; and a host of nieces, nephews, family, and friends.

The family of Mr. Chris Anthony Henderson created this Life Tributes page to make it easy to share your memories.

Send flowers to the Henderson family.