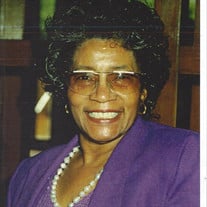 Mrs. Clara Thomas Gardner was born on October 20, 1923 in Rayville, La. She was the eldest child of Beatrice Sheppard Johnson and Uriah Johnson, Sr. Clara loved her parents unconditionally and often spoke fondly about the life lessons and words of wisdom. that they instilled in her and her six siblings. She also loved, adored and respected her maternal grandparents, Maggie Sheppard and John Sheppard, Sr. whom she visited on a regular basis. Clara accepted Christ at an early age at Martin Temple Christian Methodist Church in Monroe, La. where she was nurtured. Clara's formal education began in Monroe, La at the grammar school and Carroll High School (formerly known as Monroe Colored High School). Upon completion of high school; she moved to Baton Rouge, La. to attend cosmetology school. As a result of her stellar academic performance and achievements, she was invited by the faculty to join the program as a licensed cosmetology instructor. She was a source of inspiration as well as a wonderful sister to her six younger siblings: Matthew, Uriah, jr., Thomas, Fred, Barbara Jean and Wilbert. The care that she provided her siblings during their developmental years, epitomized her love for them. On September 25, 1952, in Monroe, La., she met and married Archie Gardener Jr., and became Mrs. Clara T. Gardner. Afterwards they moved to Milwaukee, WI in pursuit of new opportunities. Their marital union spanned 48 years and 7 months and they were blessed with one son, Anthony Randall Gardner whom she cherished. Faith and family were important aspects of her life. Mother Gardner joined Tabernacle Community Baptist on November 06, 1955 when Reverend J.L Williams was the pastor. She was a faithful member of Tabernacle Community Baptist Church for 65 years and 9 months. She was an active and devoted member who taught Sunday School; served as a spiritual mentor to countless individuals, held leadership positions, and participated in a plethora of other ministries. In 1963, she and her family lived on-site at the church and worked as church caretakers. Some of her occupational endeavors included working at Master lock and working as a cosmetologist for Northwest Funeral Chapel but the occupation that she relished the most was being a mom/foster mom and advocate to many children for more than 35 years. She is preceded by her parents Beatrice Sheppard Johnson and Uriah Johnson, Sr., her husband Archie Gardner Jr.; her siblings Matthew, Uriah, Jr., Thomas, Fred, Barbara Jean and Wilbert. Her nieces Robin Gwenette Johnson and Jacqueline Walton and her nephews Donald Ray Sheppard, Frederick Johnson Jr. Exceedingly grateful for her love, support and prayers is her son Anthony Randall Gardner and her foster children Victoria Lawrence, Stephen Bracey, Dennis Lawrence, James Atkins and many unnamed foster children. Her sisters-in-law Dr. Florence Johnson(the late Wilbert Johnson) and Mrs. Jessie Bell Swayzer Johnson (the late Uriah Johnson Jr.); her cousins including Irma Smith; Tracy Jones and Bruce Sheppard; her nieces Constance, Fern, Anita, Robin, Kimberly and Carol; her nephews Tyrone, Tared; Craig, Ivan, Teddye, Keith, and Matthew; her great-nieces and great-nephews; her great-great nephews and her friends who will always cherish her memories. During the course of her life, she prepared herself for eternity.

Mrs. Clara Thomas Gardner was born on October 20, 1923 in Rayville, La. She was the eldest child of Beatrice Sheppard Johnson and Uriah Johnson, Sr. Clara loved her parents unconditionally and often spoke fondly about the life lessons and... View Obituary & Service Information

The family of Mrs. Clara Thomas Gardner created this Life Tributes page to make it easy to share your memories.

Send flowers to the Gardner family.