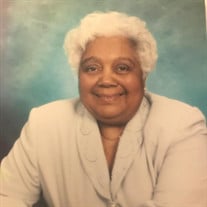 Deloriss Marie Jackson was born the fourth child to the union of Atmer Qualls and Claricy Wilson, in Onalaska, Texas on October 11, 1927. Deloris was always a talented and studious learner. In 1927, she was chosen as valedictorian of her graduating class at Dunbar High School, in Livingston, Texas. After graduation, Deloris attended Texas College in Tyler, Texas, where she majored in Economics and had a love for math. While receiving an academic program, she took part in extracurricular activities, including the drama club, cheerleading, and became a member of the Alpha Kappa Alpha Sorority in 1946 and was voted homecoming queen. Over the years, additional coursework was completed in the areas of finance and economics. Delorsis’ earliest ambitions were to be a teacher in home economics. She enjoyed working with small children. In 1947, Deloris relocated to Milwaukee, WI. She was initially employed by Rhea Manufacturing Company working on the assembly line making women’s clothing. In 1964, she was employed by Wisconsin Bell Telephone Company where she worked in the revenue department as cost analyst. She was a member of the American Business Women’s Organization and was awarded the Woman of the Year award in 1987. She retired after twenty-five years from Wisconsin Bell in 1990. Deloris has been active in the church since her early years. She has been a member of St. Mark AME Church for over sixty years. She was installed as Torchlighter, recognizing her membership in the Geraldine Bradford Missionary Society for over twenty-five years. She has served as chairperson of the food pantry for over fifteen years and has served as Trustee for twenty years. She was a member of the Anvil Club and was instrumental is initiating a church nursery and breakfast with Santa. She received the Martin Luther King, Jr. Award, awarded by St. Mark AME Church for service volunteering in the church and community. She also served many years as Financial Secretary for St. Mark AME Church. Deloris has been a member of Church Women Unied for over twenty-five years, serving in many capacities including, Finance Committee Chairperson, Scholarship Committee member, and the annual Christmas Tea Coordinator. In addition to her commitment to her church, Deloris is a member of Elected Chapter No. 7 Order of the Eastern Star where she has served as Grand Worthy Matron of Unity Grand Chapter Order of the Eastern Star State of Wisconsin for 1994-95. Under her administration as Grand Worthy Matron, she adopted Hopkins Street School as a part of her community outreach program and volunteers from the organization helped the students with reading. This special project highlights her love for children and her desire to help them whenever possible. In early June, Deloris received the Queen Esther Emeritus Award, a special award presented each year based on a member’s involvement in her chapter and community. Over the years she participated in United Negro College Fund annual walk and also the March of Dimes telethon. Deloris enjoyed games, Jeopardy, Wheel of Fortune, playing golf and reading. She was an avid traveler and loved supporting her grandchildren in every event. Deloris was married in 1949 and to William Jackson and to this union was born , Patricia and Stanley . Her proudest family moments were when her children were born. She has three grandchildren, Christopher, Terence, and Kayla and three great grandchildren, Adorie, Avery and Ayden. Deloris was preceded in death by her parents, eldest brother, Lewis Charles Qualls and eldest sister, Ernestine Walker. She leaves to cherish her memory: her daughter Patricia (John) Bowman, her Son Stanley (Dawn) Jackson, her grandchildren, Christopher Bowman, Terence(Amber)Bowman, Kayla Jackson, her great-grandchildren, Adorie Bowman, Avery Bowman and Ayden Bowman, her brother, Charles Douglas Qualls, her sister, Wilma Jean (Turrall) Moore and a host of nieces, nephews, cousins, and beloved friends.

Deloriss Marie Jackson was born the fourth child to the union of Atmer Qualls and Claricy Wilson, in Onalaska, Texas on October 11, 1927. Deloris was always a talented and studious learner. In 1927, she was chosen as valedictorian of her... View Obituary & Service Information

THE FAMILY IS REQESTING THAT EVERYONE WEAR A FACE MASK TO THE SERVICE. LIVE STREAMING https://www.youtube.com/channel/UCmsPooeYqSBYFkOqvbrCgwg/videos

Deloriss Marie Jackson was born the fourth child to the union...

Send flowers to the Jackson family.