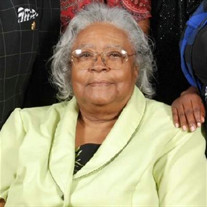 A Time To Be Born Dorothy Elois Upchurch was born on August 19, 1930 in Buchanan, which is southwest of Paris, TN. Her parents were James Franklin Upchurch and Amy Lee Gray Upchurch. A Time To Plant Dorothy’s profession of Christ happened at an early age at Western Oak Grove Baptist Church in Buchanan, Tennessee. She moved to Racine, Wisconsin in December, 1948. Began employment with St. Lukes’ hospital as a nurse’s aide. Later became the first African American to graduate from Gateway Technical College, Licensed Practical Nursing Program in 1954. After many years working as a Licensed Practical Nurse, Dorothy decided to change careers. Enrolled into the Milwaukee School of Cosmetology, Milwaukee, WI. Upon completion of the Program, she was owner/operator of her own Beauty Shop “Beauty World” in Racine, WI She retired to become caregiver for her elderly mother, sister and brothers. A Time To Serve Dorothy (Miss Upchurch) as she was affectionately called by many, worked tirelessly for the Lord until she could no longer keep the pace. She was a Charter member of Second M.B. Church, Racine. Played the Piano for the Senior Choir. Sang and directed the choir along with her brother Dale Upchurch, playing the Organ. Thirty years ago she became a Charter Member of United Faith M.B. Church, Racine. Remained a member until her demise. At United Faith M.B. Church played the piano and sang with choir until the Spring of 2018. She decided to stop playing the piano due to her failing health. During her 80 plus years working in the church, she served in many other areas of the church which includes the Missionary Society, Bible study and served as Building Fund Chairman. Over the years, she received several awards, plaques and certificates for services rendered. Fraternal Organizations A member of Badger Chapter No.5 Order of Eastern Star PHA for over 50 years. served as Worthy Matron and musician. She was a charter Member in the Prince Hall Heroines of Templar Crusade Order of Cyrene Knights of Templar and its Jurisdiction, Dorothy served as Most Noble Princess Captain of Lucille Moore #3, Racine, WI Dorothy was one of the founding and a lifetime member of the Tennessee Reunion Club, which have been in existence for over 60 years. A Time To Die On Sunday, September 5, 2021 at the age of 91, Dorothy went home to be with her Lord. She leaves to cherish her memory five (5) nieces and nephews. Marian (Marshall) Millard Tharpe, Racine, WI, Herman Millard, Jr., Florissant, MO, Cecilia Millard, Racine, WI, Samuel (Erma) Millard, Cahokia Heights, IL, and Veronica Millard-Gill, Houston, TX. Six (6) Great nieces and nephews. Sherri (Jerry) Simpson, Micah Tharpe, Regina and Latrina Foots, Amrian Millard and Tyler Millard. Eight (8) Great Great nieces and nephews. Many cousins and friends. Two long time friends, Mother Bernice Hardville and Sister Barbara Hicks, who made regular welfare calls to her. Dorothy was preceded in death by her parents, four (4) brothers, John Jasper, Cloyance Woodson, Louis Franklin and Dale Upchurch. Two (2) sisters Lula Mae Upchurch Millard and John Ella Upchurch Millard.

A Time To Be Born Dorothy Elois Upchurch was born on August 19, 1930 in Buchanan, which is southwest of Paris, TN. Her parents were James Franklin Upchurch and Amy Lee Gray Upchurch. A Time To Plant Dorothy&#8217;s profession of Christ happened... View Obituary & Service Information

A Time To Be Born
Dorothy Elois Upchurch was born on August 19,...

Send flowers to the Upchurch family.