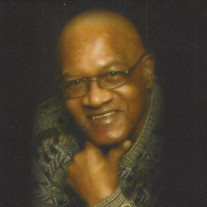 Earnest Edward Ross was born on April 19, 1947 in Lena, Mississippi. He was one of 11 children born to James and Elnora Ross. He graduated from North Scott High School in Forest, Mississippi. Soon after, he moved to Milwaukee, WI. In February of 1969, he was drafted into the United States Army. He was honorably discharged and made a safe return home in September of 1970. In 1974, he met Shirley Ross (Handford). They had a lovely courtship. The two united in 1980 and were blessed with 4 children, DeAndre, Terrance, Marcus, and Nakea. Earnest also has two children from a previous marriage. The love for his children was undeniable. Earnest spent time pouring into his family and instilling values in his children, molding them into the individuals they are today. For many years, he was a family and working man until he retired from Tower Automotive, formerly A.O. Smith in 2006. Earnest was not a man of many words, but when he' talked, he said a lot, even if it was a little. He was not a jokester, but when he laughed, he really laughed. He absolutely loved fishing with his brothers and earning trophies from bowling in the leagues with his wife. Every year, they would travel to the Hoinke Classic in Cincinnati. And, whether they won or not, he still smiled and raved about the time he had. Earnest was the "Grill Master". Every holiday that called for BBQ, he threw down with pleasure. If you knew Earnest, you knew he loved his children and loved his grandchildren even more. He didn't need to be around a lot of people, and he did not like talking on the phone. He rocked in his chair, watched the news, and watched his sports. He maintained a yard like you wouldn't believe and could be heard from a window at any given time yelling "Get off my grass." Everyone around the neighborhood knew "Mr. Earnest." On July 19th of 2021, Earnest was called to eternal rest. He was the best husband, father, grandfather, uncle, brother, and friend who was so very loved. Earnest was preceded in death by his parents and siblings Eddie, L C, Lenwood, Bonnie, and Eva. He is survived by three sisters, Bertha Nichols, Milwaukee WI, Jereline Stocklin, Dallas, Texas, and Margaret (Frank) Echols; two brothers, Willie (Lois) Ross and John (Joanne) Ross, Milwaukee WI; three sister in laws, Pat, Lillie, Milwaukee WI and Verlina Ross Alpharetta, GA; grandchildren, Marquise, Armani, Terrance Jr.. DeAndre Jr.. Terrion, Te'Yana, Jersee, Jurnee, and Jade; great grandchildren, Marquise Jr. and a host of relatives and friends; and special friend, Boykin known to many as Blackmon.

Earnest Edward Ross was born on April 19, 1947 in Lena, Mississippi. He was one of 11 children born to James and Elnora Ross. He graduated from North Scott High School in Forest, Mississippi. Soon after, he moved to Milwaukee, WI. In February... View Obituary & Service Information

The family of Mr. Earnest Edward Ross created this Life Tributes page to make it easy to share your memories.

Send flowers to the Ross family.