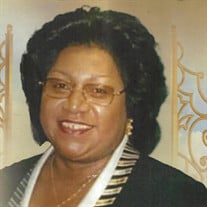 Edith Ray (Wortham) Taylor was born in Oxford, Mississippi, on October 4, 1942 to Willie Bell Campbell and Titus Owens. She accepted Christ at an early age and was united with 2nd Baptist Missionary Church in Oxford. Edith was lovingly reared by her mother and stepfather, Isaac Campbell. She attended Oxford Public Schools for elementary and high school. ln 1961, she moved north to Milwaukee, Wisconsin, to live with her father; Titus. Edith continued her education at the University of Wisconsin-Milwaukee, majoring in Journalism and Social Work. Her avid love of reading and writing led her to be a contributor to several local newspapers, including the Milwaukee Journal After arriving in Milwaukee, Edith met and married John Taylor in 1962. Edith was the proud mother of three boys, Darry, John and Gregory. Edith was employed by Briggs & Stratton before landing her dream job with Girl Scouts of Milwaukee Area where she became the first African American Field Director. She found her passion working with children and was noted for integrating troops within the City of Milwaukee, utilizing local churches and community centers, including Project Focal Point. She also founded a summer day camp program for girls called Soulsville, which provided employment for many youth throughout the city. In 1993, Edith Taylor was united in holy matrimony to the love of her life ,Andrew Taylor. With this beautiful union, two families became one and Edith gained two wonderful children, Guy and Pam Taylor. Together; Edith and Andrew created Edith & Taylor's Gospel Shop, 1i1ling a niche in the Milwaukee community. Edith & Taylor's Gospel Shop became known for its unique and rare Christian related material. Edith and Andre worked side by side to make the business a success. Edith Taylor united with Bethel Baptist Church, under the leadership of Rev. Leonard McDonald, where she quickly became a leader and strong presence within the church. Edith served as leader of the Finance Team, Youth Director and trusted confidante to her pastor. She later joined Free Spirit Baptist Church before uniting with New Covenant Baptist Church under the leadership of Rev. Fred L. Crouther. Once again, she took on leadership roles serving as the Pastor's assistant and organized several men~ retreats until her health would no longer permit. Edith enjoyed spending time with her grandchildren, and she loved to fish. She was kn£.lftj·ft'-4jffj,t~ her children, grandchildren, nieces, and nephews to the Girl Scout camps so that she would have the opportunity to catch some fish. She also enjoyed attending Gospel concerts and shows, entertaining and cooking, especially her dressing. On February 6, 2022 God, in His infinite wisdom, saw lit to call his beautiful child home. She leaves to cherish her memory her beloved children, Darry (Rochelle) Wortham, John (Angela) Taylor of Caledonia, "WI, Gregory Taylor, and Pamela Taylor of Memphis, IN; her daughter-in-10ve, Debora Taylor of Memphis, IN; four sisters, Gloria Mitchell, Dolores (Edward) Cobb, Rosalyn (Ed) Thomas of Springfield, MO, and Brenda Cosey; three brothers, Earl (Jackie) Campbell, Melvin Patterson and Michael Owens;15 grandchildren, 15 great grandchildren; 1 great-great granddaughter; and a host of other relatives and friends. She was preceded in death by her loving husband, Andrew Taylor; parents, Willie Bell and Isaac Campbell; father, Titus Owens; son, Guy Taylor; sister, Debra McNeal and grandson, Andre Taylor.

Edith Ray (Wortham) Taylor was born in Oxford, Mississippi, on October 4, 1942 to Willie Bell Campbell and Titus Owens. She accepted Christ at an early age and was united with 2nd Baptist Missionary Church in Oxford. Edith was lovingly... View Obituary & Service Information

The family of Mrs. Edith Ray Campbell-Taylor created this Life Tributes page to make it easy to share your memories.

Edith Ray (Wortham) Taylor was born in Oxford, Mississippi, on...

Send flowers to the Campbell-Taylor family.