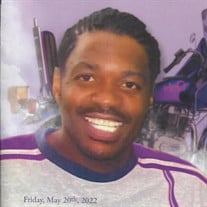 Edward Lee Fearen better known as "Eva Lee" or "Ed" was born to the parents of Earnestine and Garfield Fearen on July 16th, 1969 in Milwaukee, WI. He was the baby of four siblings. Edward loved the Lord and accepted Christ at an early age. Ed received his education at McNair Elementary School as well as Webster Middle School then later went on to Riverside University High School. He was one very bright and intelligent individual. In his free time, Ed loved to cook! He stayed in the kitchen and the kids stayed eating good with him. His specialty was fried chicken and macaroni and cheese, and no one could out cook him in that. Ed was the life of the party and lit up the room with his presence, handsome smile and good sense of humor. Being around him you'd always laugh and have a good time. Edward's favorite singer of all time was Prince. How could we forget? He would always walk around singing and dancing every song as if he was performing on stage as Prince. Ed was a loving and compassionate son, father, brother and uncle. Edward met his first love, Alacia Smith, in 1986 and later shared a son named Ontario. Ed named him that. He shared a special bond with his nieces and nephews that loved him dearly and he truly loved them as well. Ed gave everyone a nickname he encountered and we will always live by it. To cherish his loving memory, Edward leaves behind his sons, Ontario D. Fearen and Daniel Gatson. Siblings: Ray Fearen (Phaleshia Pinder-Fearen), Jeanette Fearen, Dominique Fearen ,Vanessa Fearen-Minor (jirnrnie Minor) and Arlene Gordon. Nieces and Nephews: Markeeta Fearen, Monique (Arthur) Terry, Phaedra Fearen, Amari Fearen, Breanna Fearen, Aliyah Gipson, Alyjah Fearen, Kilam Fearen, Chanterra Taylor, Keaneu Taylor, Logan Taylor and Jaden Morgan. Grandkids: Onrrian Fearen and Ontariana Fearen. Bestfriend: Deborah Nash and a host of great nieces, nephews, family and friends. Proceeded in death: Lucille Carson, Roosevelt Green and Lucy Mae Fearen. We will truly miss Eva Lee! He will always have special memories with each and everyone of us and remain in all of our hearts.

Edward Lee Fearen better known as "Eva Lee" or "Ed" was born to the parents of Earnestine and Garfield Fearen on July 16th, 1969 in Milwaukee, WI. He was the baby of four siblings. Edward loved the Lord and accepted Christ at an early age. Ed... View Obituary & Service Information

The family of Mr. Edward L. Fearen created this Life Tributes page to make it easy to share your memories.

Send flowers to the Fearen family.