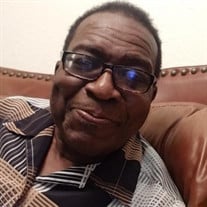 On July 27th 1948, in the city of Harlem, New York an adorable and much anticipated baby boy was born into the Eversley family. His par- ents, Egbert Eversley, Sr. and Gertrude Eversley were excited to have a son and his two sisters Edith, whom Bert affectionately later called ER and Audrey were thrilled to have a little brother. As an adult, Egbert, better known as Bert moved to Madison, WI and later to Milwaukee. To know Bert was to love him. He had no problem talking to anyone about any topic. He especially loved politics and history and was a Bible Scholar, All of the children in the family and at Children Knowledge Day Care Center loved "Uncle Bert". He was like a grandfather to them. He would come and play games and sing with them. Bert had many friends throughout the city of Milwaukee, Madison, and other states across the country. He had pet names for many of his nieces and friends. If you are here today, you will recognize your name, Mother Buffy, H Pockets, Susie Sunshine, Mis Em, Hang Our Hannah, Dizzy Lizzie, Booga Lou Sally, Sapphire, Miss Pretty, The Princess, and Brother from another Mother. Bert's two best friends since childhood were Clarice Davis, of Colorado and Bobby Aikens of New York. They talked on the phone often. Dorothy Mason and Sherry Hill you were like sisters. The nurses at Riverside Hospital will always remember Yvonne as his "favorite niece", Tisha, he adored you. Bert accepted Christ at an early age and was a member of St. Andrews Episcopal Church in New York City. He graduated from Commerce High School in 1966 and attended Bethune Cookman College in Daytona, Florida and later the State University in Albany at New York (SUNY)in 1973. He pursued a degree in political science. Bert enjoyed playing chess and the piano. He had a lifelong love for music. He was active in Pilgrim Rest Missionary Baptist Church as a church school teacher and trustee. He sang with the Pilgrim Rest Male Chorus and Praise team. When he relocated to California, he became very popular with the residents at his Sunday evening sing-a-longs. His favorite song was A Very Special Love. Bert mastered in the areas of education and sales for over 40 years. He worked at Madison Freight Company, RF Technologies, Raintree Steck-\ Vaughn Publishing Company, Career Youth Development School, Sams Club and Holy Redeemer Charter School. Bert carries with him the love, respect and appreciation of all who knew him. He touched the hearts and minds of everyone that he knew. He left an imprint on the world that will be felt for many years to come. Though his journey in this world has ended, his kindness, stories, laughter, and intellect will live on eternally in our memories. Bert is survived by Arrila Eversley, his beloved wife of 39 years; his dedicated and loving son, Garett Eversley; daughter-in-law, Christal Stanley-Eversley; brother, Carl Eversley; nephews, Edward Sturges (Yvonne) Harold Johnson and Anthony Taylor; nieces, Sarah Sturges, Margo Purdue, Evelyn Rivera, Alicia Johnson, Kamesha Taylor, Latonya Echols, Latosha Cooper, Rachel Spell and Marquita Taylor and Tanesha Taylor. Also grieving his loss are a host of great nieces, nephews, and many family and friends. Bert transitioned to Glory on October 10th 2021.

On July 27th 1948, in the city of Harlem, New York an adorable and much anticipated baby boy was born into the Eversley family. His par- ents, Egbert Eversley, Sr. and Gertrude Eversley were excited to have a son and his two sisters Edith,... View Obituary & Service Information

The family of Mr. Egbert Eversley created this Life Tributes page to make it easy to share your memories.

Send flowers to the Eversley family.