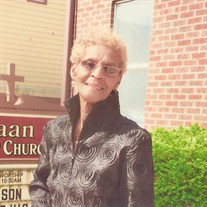 Elaine Marie was born July 23,1938 in Many, Louisiana and was the 8th of 12 children. The family migrated to Benton Harbor, Michigan in 1947 for better opportunities. After graduating from Benton Harbor High School in 1957 Elaine relocated to Milwaukee, Wisconsin where she attended the University of Milwaukee for one year and went on to receive her Associate's Degree in Nursing from Milwaukee Area Tech- nical College. She married James Lee in 1963. This union of love pro- duced a daughter, La-Ronda S. Lee. They were married seventeen years before he passed at the age of 39. Elaine accepted Christ at an early age and was a member of Mount Moriah Baptist Church under the late Rev. Kenneth A. Bowen. She later became a member of Canaan Baptist Church under the leader- ship of Rev. Dr. Fredrick E. Jones where she served on the nurses board. Elaine loved fashion and was a local model in Milwaukee. She graduated from John Robert Powers Modeling School and began mod- eling for many of the well-known stores. Elaine not only had style and grace, she had a love for fast cars. In fact she owned three Camaros and a Ford Mustang. Elaine worked at Briggs & Stratton Corporation for 31 years before re- tiring. Elaine had always wanted to become a nurse and after retiring from Briggs was able to fulfil her dream. She became a certified Nurs- ing Assistant and loved taking care of others. She in fact, was a nurse with Home Instead and was employed there for fourteen years up until the ripe young age of 79. She would always say, "I enjoy helping older people". Additionally, Elaine was also a State Nurse with the United Ushers and Nurses and a member of the American Legion. Endearingly called "Sister Sledge" or "Mrs. E", Elaine always had a positive attitude and words of encouragement for those around her. She forever showed compassion, love and a warm smile. Whenever she was faced with life challenges, she would simply say, "Well it could always be worse". She loved life and lived it on her own terms. She enjoyed spending time with her daughter in Dallas, her family in Benton Harbor, MI, her furry little grandson, Pepper as well as her church family and friends. Elaine Marie Joseph Lee entered heaven to be with the Lord early Thanksgiving morning, November 26, 2020. Elaine leaves to cherish her memory, one daughter La-Ronda Lee of Dallas, TX; one godson Antwan (Brooke) Joseph, one grandson Pepper, four brothers; L. J. Joseph of Benton Harbor, MI; Bill (Donna) Joseph of Grand Rapids, MI; Lewis (Mildred) Joseph of Benton Harbor, MI; Charles (Donna) Jo- seph of Phoenix, AZ; three sister-in-Iaws; Cynthia Joseph of Houston, TX; Mary Jo Joseph of Benton Harbor, MI; Julia Joseph of Mishawaka, IN; and a host of nieces, nephews, family and friends. She was preced- ed in death by her husband, James Lee, parents Maggie B. (Maxie), Iseah Joseph Sr.; two sisters Annie Lee Yates, Mary Lee Bell; five brothers, L.P Joseph, Allen Joseph, Iseah Joseph Jr., Shevon Joseph and Otis Joseph Sr.

Elaine Marie was born July 23,1938 in Many, Louisiana and was the 8th of 12 children. The family migrated to Benton Harbor, Michigan in 1947 for better opportunities. After graduating from Benton Harbor High School in 1957 Elaine relocated... View Obituary & Service Information

The family of Mrs. Elaine Marie Lee created this Life Tributes page to make it easy to share your memories.

Send flowers to the Lee family.