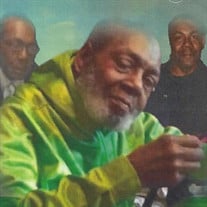 Elliston Melvin Smith was born on January 28, 1953 in East Carroll Parish, Louisiana to the union of Luella and Wade Smith, Sr. Elliston attended Farragut High School in Chicago, lllinois. In 1964, Elliston joined the United States Marines and after serving two years, he'd enlisted with the United States Air Force. While serving our country, Elliston earned his Associate's Degree in Radio Telegraphy. Later years thereafter, Elliston was united in holy matrimony to Ms. Debra Smith. Elliston better known as "Pops" amongst his family and friends, enjoyed life and lived it to the fullest. He'd always made an effort to express how much he'd appreciated and cared about those he'd encountered on a daily basis. Pops loved his family and was seen with either his children or grandchildren often which gave proof that he was they guy to be around. Pops was also the center of attention amongst his healthcare workers. Even after his transition, they made certain that "Pops" was taken care of. Elliston Melvin Smith will be truly missed, but he will be most definitely in the mind, heart and soul of those he'd touched. Elliston Melvin Smith was called to eternal rest on Monday, March 4, 2022. He was proceeded in death by his wife, Debra (Comella) Smith. Parents: Luella and Wade Smith,.. Sr. and sister, Chestine Smith. Elliston Melvin Smith leaves to cherish his memory: One brother: Wade Smith, Jr (Chicago, ll). Four sons: Jamil Clark, Omar Smith, Ali Smith arid Jomo (Theresa) Smith. Two daughters: Kim Smith and Tamara (Albert, Sr.) Carter. Sixteen grandchildren and a host of nieces, nephews, cousins and friends.

The family of Mr. Elliston M. Smith created this Life Tributes page to make it easy to share your memories.