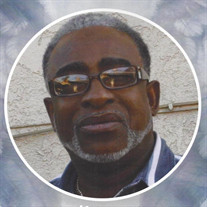 Mr Elmo Burns Jr. was born to Elmo and Luevator Burns Sr. on October 26, 1956, in Chicago, Illinois. He attended George Manierre Elementary School and Robert A. Waller High School. Elmo pursued many interests. He was a fashion icon, who wore tailored clothing and performed his own alterations. Only a handful of young men were able to afford custom clothing in high school, and Elmo was among that number. His initials were embroidered on a lapel of the shirt and a rear trouser pocket of every walking suit-he wore. Walking suits consisted of a shirt with matching trousers and the style originated in the Caribbean Islands. Elmo loved various genres of music and enjoyed stepping to nearly every beat. He was fond of R & B, funk, smooth jazz and disco music. Elmo was not a "jack" of all trades ... that would be an understatement of his many abilities. He was a prolific, productive and skilled master tradesman. He was extremely gifted in auto repair. I don't believe there was a vehicle that he couldn't repair. For example, he performed scheduled maintenance such as motor and transmission oil changes, installed brakes, serviced radiators and even was able to drop an engine or transmission for repair. Elmo performed masterfully in the construction trades, being proficient in plumbing and electrical wiring, installation of drywall/mudding, taping and finishing, installation of fioor and wall tile, painting, pane and glass block window installation and more. Some of his children learned a specific trade from him. Elmo was an excellent cook. For example, he cooked a perfectly seasoned, fiavorful pot of greens, chitlins, rice and pinto beans, in which the gravy had to be just right. He and his wife recently held a competition over who cooked the best tasting chitlins. When Elmo grilled meat, it was so tender it would fall off the bones. He was always the one chosen to grill food at family picnics and bbq's. Elmo was so resourceful that he formed butterfiy stitches out of panty liners, to close facial wounds that Jordan had on his chin and Aaron had above his eye. He had so many skills that they cannot all be listed here. His parents and sister Charlotte Burns preceded him in death. He leaves to cherish his memory: loving wife and life partner, L'Tanya Luster Burns of Milwaukee, Wisconsin; his children, Tawanda Hall, Marquis and Kentoria Lampley, Aaron and Shecori Burns, Kent and Tiffany Thomas, Aaron and Jordan Silas of Milwaukee, Wisconsin; Keisha and Terrence Burns, Elmo and Calliea Gideon, Rodney Flukes and Monique Luster of Chicago, Illinois; Antonio, Brian and Taylor Silas of Richmond, Virginia; three sisters, Georgia Patterson, Carolyn Alexander, Julia Burns; and a brother, Lawndale Burns of Chicago, Illinois; two aunts, Mae and Jessie Sample of Chicago, Illinois; an uncle, Eddie Sample of West Memphis, Arkansas; a host of grandchildren and great-grandchildren; and a host of nephews, nieces, cousins and friends. Mr. Elmo Burns Jr. - a man full of love and compassion who loved life and family, who touched the lives of many, and who will be missed and cherished by all who knew him.

The family of Mr. Elmo Burns created this Life Tributes page to make it easy to share your memories.

Mr Elmo Burns Jr. was born to Elmo and Luevator Burns Sr. on...

Send flowers to the Burns family.