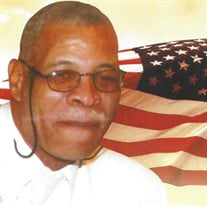 Ernest Lee Gates was born February 26, 1946, to the late Louise Gates and Earl Strong in Millington, Tennessee. He grew up in a blended family environment that increased his siblings and other relatives. In addition to his birth parents, he was blessed to be a member of the family of Annie Mae and Earl Kirk. He accepted Christ as his Savior at an early age and was baptized at the Greater Bush Grove Baptist Church in Lakeland, Tennessee under the leadership of the late Reverend John Greer. Ernest "Fireball" spent his formative years in the close-knit community of Brunswick, Tennessee where he attended Brunswick Elementary and Barretts Chapel High School. He formed many relationships with young and old that lasted a lifetime. He loved to visit and reconnect during his many trips back to Tennessee and during his travels to other states. He never met a stranger and would reach out to others and make every effort possible to put a smile on their face. Ernest enlisted in the United States Marine Corp. in January 1967 and was a Vietnam War Veteran. He never forgot to remind you that "Once a Marine, Always a Marine." He was honorably discharged in April 1970. After military service he moved to Milwaukee where he met and later married Carolyn Wilson. Ernest worked for Love's Liquor until he was injured and began his first of many surgeries. Between his recovery times he spent a great deal of time with the children in his family. He had a special relationship with his nephew, Justin Moore who gave him a gift that read "Best Friends for Life." He was a long-standing member of the Friendship Club where he enjoyed playing cards, dominos and hanging out with people. Once it became too difficult for him to drive or get around, he started his own club in his garage. He spent a lot of time playing cards, dominos, and talking on the phone. He enjoyed friends of all ages and would always let you know how he felt about you. From the time Ernest was young, he developed the ability to adapt to whatever surroundings, situations and people that were near him. It was his coping mechanism for his own wellbeing and not an opportunity to hurt or make a difference in people. He lived and interacted by his own rules. He spent much of his time at the VA Hospital due to his many illnesses. Ernest entered into eternal rest on December 7, 2020. He was preceded in death by his parents, four sisters, and seven brothers. Left to cherish his memory are his wife, Carolyn Gates; four daughters, Tracey (john) Eaton, Tierra Gates, Carey, and Christine Wilson all of Milwaukee, WI; son, Christopher Mason of Nashville, TN; three brothers, Johnnie (Mary) Gates, Walter Gates of Memphis, TN, and Walter (Georgia) Johnson of St. Louis, MO; three sisters, Ann (Kevin) Ricks of California, Ernestine Swift of Nashville, TN, and Betty Smith of Milwaukee, WI; and one aunt, Lois Hayes of Memphis, TN; three sisters-in- law, Diann (Ray) Whitaker, Janet (Ronald) Fudge, and Ann Beth Moore of Milwaukee, WI; one brother-in-law, Robert Moore of Milwaukee, WI; and a host of grandchildren, nieces, nephews, cousins, and friends.

Ernest Lee Gates was born February 26, 1946, to the late Louise Gates and Earl Strong in Millington, Tennessee. He grew up in a blended family environment that increased his siblings and other relatives. In addition to his birth parents,... View Obituary & Service Information

Send flowers to the Gates family.