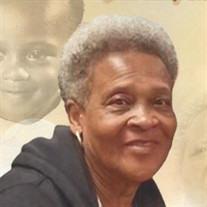 Estrellia Hamilton Parker was born on September 20, 1946 to the union of Charles Hamilton Sr. and Texana Gholston Hamilton. Estrellia is the second of eight siblings and was known by her family and friends at "Baby Sister"! "Baby-O". She attended Fourth Street Elementary School and Garfield Avenue Elementary School for her early education and graduated from Lincoln High School. She would later attend Cosmetology School where she became a licensed Esthetician and completed her education at the University of Wisconsin-Milwaukee, Professionally, Estrellia accomplished many things. Most incomparably, she was the first black building inspector for the City of Milwaukee and an esteemed property owner, After 30 years of service, she retired from the City of Milwaukee but continued to build her property business, Estrellia enjoyed fishing. gardening, watching black and white westerns and mostly spending time with friends and family. Above all. she enjoyed her daily trips to the bank and balancing her bill book. Estrellia was unselfishly devoted to her family and the love and bond she had with her daughter Sonja was unbreakable. Estrellia was immensely proud of Sonja and glowed whenever she spoke of her. Their relationship went beyond Mother and Daughter, they were best friends, confidants, and business partners. It was solid, unchanging, and strong. Estrellia was and will always be Sonja's ROCK! Estrellia Hamilton Parker departed this life on November 30, 2021 and was preceded in death by Charles Hamilton Sr. (father), Texanna Hamilton (mother), Emmett Arnold (long term companion), Charles Hamilton Jr. (brother), Gene Earl Davis(Brother-in- law), Rondel McElvain Brother-in-law), Andrew Key (Brother-in-law), Yolanda Parr Golden (niece), Marja Mcclendon (niece), David Arnold (nephew) and Byron Marshall (nephew). She leaves to cherish her memory daughter Sonja Hamilton (Tyrah Kingcade-companion) and grandson Donald Kendrick Jr. Sisters Ethel Key (Wisconsin), Rosalyn Hamilton McElvain (Wisconsin), and Katherine Hamilton-Davis (Wisconsin). Brothers Jamon (Faye) Hamilton (Wisconsin), Flynn (Lavon) Hamilton (Wisconsin), Brett (Geneva) Hamilton (Texas) and a host of family and friends. She will also be missed and remembered by a very special first cousin and best friend Hazel Martin and longtime friend Simon Robinson.

Estrellia Hamilton Parker was born on September 20, 1946 to the union of Charles Hamilton Sr. and Texana Gholston Hamilton. Estrellia is the second of eight siblings and was known by her family and friends at "Baby Sister"! "Baby-O". She attended... View Obituary & Service Information

Send flowers to the Parker family.