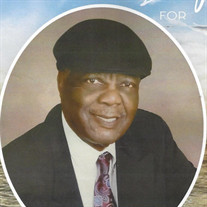 Brother Eugene Formerwas born September 10, 1938, to the union of Louis Farmer and Nettie (Chisley) in Clarksdale, Mississippi. His early education was in Milwaukee, Wisconsin, at Lee Street Elementary School and North Division High School. He left high school at the age of 18 years and enlisted in the United States Airforce in 1956. There, he furthered his education. Eugene's basic training took place a Lockbourne Airforce Base in Ohio. He ranked as Airman 2nd Class. After Eugene's basic training he was stationed at Thule Airforce Base in Greenland Alaska and Holloman Airforce Base in New Mexico. During his enlistment Eugene traveled to England, France, Turkey, North Africa, and many of our United States. While in the U.S. Airforce Eugene married Vivian Faye (Pullins) in Ohio, who later went to be with the Lord June 2, 1971. This union was blessed with their daughter Felecia Faye (Gladney). On November 29, 1962, he received an honorable discharge from the United States Airforce. After his discharged Eugene obtained employment with Milwaukee County Hospital in 1963, as an orderly. In 1964, Eugene gained employment with the Milwaukee City Police Deportment. While employed, he attended MATC - Criminal Justice and Police Science Program. Beginning January 8, 1967, he served in various capacities: Vice Squad Division, Open Records, Violent Crimes and Homicide Unit. In 1973, he received his degree in Criminal Justice/Police Science. March 28, 1992, he received certification of the African American Police Officer/Crisis and Identity. On May 15, 1992, he was certified by the Wisconsin Department of Justice in Death Investigations. Eugene retired from the Milwaukee Police Department in 1994. After retirement"Eugene obtained employment at In House Corrections. There he served as manager under the direction of owner, Mr. Eddie Robinson. Eugene retired from In House Corrections 2007. October 1, 1995, Eugene married "wife." This was the name he called her, Lydia (James). Whom he loved to travel, garden, and cook with. He would tell "wife" life has its own adventures, so we better make ours. Eugene and "wife" also shared the words "We're Still on This Journey Together." In his free time Eugene enjoyed barbecuing, fishing, football (Packers) and gardening. In his "hay day" Eugene was a davit pool player and bowler. Eugene also enjoyed being with his Over the Hill Brothers. May 4, 2003, Brother Eugene Farmer united with Tabernacle Community Baptist Church under the leadership of the late Pastor, Dr. Robert L. Harris. Eugene continued his Christian studies and journey under the tutelage and leadership of Pastor, Dr. Don Darius Butler. Eugene served the church in the capacity of Media and Sound, Security and Church School Assistant Teacher Class No.6. On April 17, 2021, our Lord and Savior deemed it time for Eugene to come home for rest. Preceded in death by his parents, Louis and Nettie Farmer, sisters, Catherin and lona (Mallet), brothers Louis and Elmer. He leaves to cherish his memory wife, Lydia R., daughter Felicia Faye Gladney, stepdaughter LaToya (Cornell)Chapman, grandchildren, Terrell Gladney, Kennedi and Conor Chapman, four great-grandchildren, Taziyah, Amari, Ayanna, Isaiah, sister, Dorothy Clay, eldest nephew, Sam Carr, special cousin Pam Webster (Twin), CNAs LaToya Jones and Vanessa Hobson and his Spiritual Brothers, George Gaston, AI Holifield, Reacy Armstrong, along with the Over the Hill Brothers, and a host of loving relatives and dear friends.

The family of Mr. Eugene Farmer created this Life Tributes page to make it easy to share your memories.

Send flowers to the Farmer family.