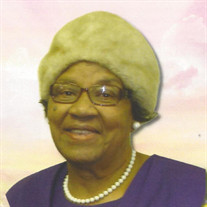 I was one of nine boys and girls born to the late Walter and Carrie Pitchford on June 4, 1922, in Lexington, Mississippi. At age 12, I accepted Christ and was baptized at Macedonia Baptist Church in Lexington, Mississippi, pastored by Reverend Richard McClain. I attended Ambrose Vocational High School from Kindergarten through 12th grade. After graduation, I furthered my education at Saints Junior College where I became a Teacher/Principal. During college I met Walter Lee. On April 26, 1944, we united in holy matrimony. Shortly, thereafter, my husband was drafted into the United States Army. Upon his return home, we were blessed to have our first child, Bobbie, on December 30, 1946. God blessed us to have seven children during our marriage of 73 years. Because the job opportunities around Lexington were very limited, we were encouraged by our parents to leave Mississippi and move North. On March 23, 1947, we arrived in Milwaukee, Wisconsin, during an intense snowstorm. As we settled in, I became employed by Milwaukee Public Schools. During my Christian journey, Walter Lee and I found our first church home, Tabernacle Community Baptist Church. I was a diligent servant and served on the Mother's Board for several years. While at Tabernacle, Walter Lee announced to Pastor Reverend Jewel Williams that the Lord had called him to preach. With my total support, I saw my husband continue to be elevated in his ministry, by becoming an Assistant Pastor at Pilgrim Rest Baptist Church. Several years later, my husband was approached by the Wanderer''s Home Missionary Baptist Church to become their Pastor. My role as a Homemaker, Wife, and Christian was also enhanced as I became a Pastor's wife and "First Lady". Ten years later, Pastor Smith founded the Newport Missionary Baptist Church where I served as the First Lady and First Lady Emeritus until the Lord called me home. I also served as an active member of the General Baptist State Convention of Wisconsin, lnc.. and was a member of the Ministers Wives of Wisconsin. In my leisure, I enjoyed watching game shows and Milwaukee Bucks' games on television, fishing, word search puzzles, visiting with my children, grandchildren, great-grandchildren, and extended family. My heart was being a mother to many. I left this world on Thursday, February 10,2022, and joined my father, mother, sisters, brothers, husband, and daughter (Pamela). I left to cherish the legacy of my life to my beautiful and loving family: Bobbie (Willie deceased), Samuel (Therasia), Annie (James), Walter Jr. (Donna), Patrick (Margo), and Anthony (Wendy); thirteen grandchildren; thirteen great- grandchildren; one great-great grandchild; sister-in-law, Senora Smith; son-in- law, Steven Sr.; along with a host of other in-laws, relatives, and friends. "Behold, how good and how pleasant it is for brethren to dwell together in unity!" Psalm 133:1

The family of Mrs. Fannie Beatrice Smith created this Life Tributes page to make it easy to share your memories.

I was one of nine boys and girls born to the late Walter and...