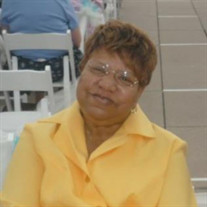 Florine Della Ingram was born on March 15, 1937 to the union of Clarence Sr and Charline Ingram in Milwaukee Wisconsin. She was the second child of seven children. Florine received her formal education from the Milwaukee Public School System in Milwaukee Wisconsin. She graduated from North Division High School in 1955. Florine joined Mt Carmel Missionary Baptist Church in 1999, under the leadership of Rev. Dr. Hugh Davis Jr., where she diligently served on the Nurses Guild and then on the Mothers Board where she lovingly served until her homegoing. She will be remembered for how she praised the Lord in dance during church service and her way of sharing God’s teachings with copies of religious poems, sayings, tributes, and scriptures, especially for “her Deacons!” Florine worked for 26 years at Milwaukee County Mental Health as a nursing assistant retiring at the age of 55. Mother Florine, or Flo as she was known, loved shopping, enjoyed all kinds of arts and crafts; needlepoint, crocheting. She always looked forward to spending time at the Washington Park Senior Center several times a week to keep active and her weekly walks with her son Duane. Florine also enjoyed her luncheons with former retirees where they talked endlessly about old times. Her family always raved about her peach cobbler which Florine was more than willing to cook up a few and share them if asked. Florine unexpectedly departed this life February 16, 2021. She was preceded in death by her father Clarence Ingram Sr, her mother Charline Ingram; brothers, Garry Ingram, Eddie Ingram and her grandparents, William and Estella Barnett. Florine leaves to cherish her memory one daughter, Brenda Ingram, two sons, Duane (Janell) Ingram and Darnell (Stacy) Ingram; three brothers, Clarence Ingram Jr., Gregory (Pat) Ingram, Tracy (Karen) Ingram, and one sister, Stella (Kenneth) Miller, five grandchildren Tiffany, Terrell, Kelly, Michael Sherrod, Keith, six great-grandchildren, and a host of nieces, nephews, cousins, and other relatives and friends.

Florine Della Ingram was born on March 15, 1937 to the union of Clarence Sr and Charline Ingram in Milwaukee Wisconsin. She was the second child of seven children. Florine received her formal education from the Milwaukee Public School System... View Obituary & Service Information

The family of Ms. Florine Della Ingram created this Life Tributes page to make it easy to share your memories.

Send flowers to the Ingram family.