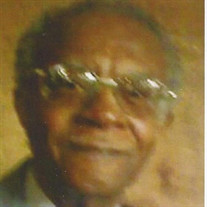 Fred Bowen was born on August 31, 1940, to the union of Willie B. Bowen, Sr. and Lucille Bowen in Russell County, Alabama. Fred received his formal education at Russell County Training School in Hurtsboro, Alabama. Fred furthered his education later in life by taking classes at Milwaukee Area Technical College. On May 17, 1961 Fred enlisted into the United States Air Force. He was honorably discharged on May 14, 1965. On June 12, 1969, Fred Bowen united in holy matrimony with Elnora Harris in Phenix City, Alabama. Their union was blessed with three children. He was employed by RBC Wealth Management. His last position held was Associate Vice President of Administration and he retired after 45 years of employment. In his leisure, he enjoyed music, managed a band, and was a bartender in his earlier years. He was also a disc jockey while enlisted in the Air Force. He was also a member of the International F. & A M. Masons and Order of the Eastern Star. Fred Bowen departed this life on August 27, 2021. He was preceded in death by his father, Willie B. Bowen, Sr.; mother, Lucille Bowen; and brothers, Willie B. Bowen, Jr., Roosevelt Bowen, Sr.. and Robert Bowen, Sr. He leaves to cherish his memory: wife, Elnora Bowen; three children, Teron Bowen, Sr.. Jennifer (Robert) Crotteau, and Latora (Jared) Bowen; six grandchildren, Savannah, Teron Jr.. and Lamar Bowen, Lailani, Jared, and Aiden Jones; one great-grandchild, Caylee Morris all of Milwaukee, WI; nieces, nephews, and a host of other family and friends.

The family of Mr. Fred Bowens created this Life Tributes page to make it easy to share your memories.

Send flowers to the Bowens family.