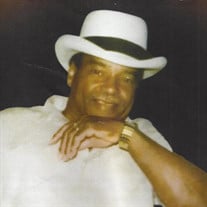 Gerald "Jerry" Leon Williams Sr. was born on December 11, 1935, to the union of Edna and Eugene Williams Sr. in Milwaukee, Wisconsin. Jerry received his formal education within the Milwaukee Public Schools System where he attended Lee Elementary School, Roosevelt Middle, and Milwaukee Boys Tech High School. At the age of 17, Jerry joined the United States Army where he became an Expert Sharpshooter. Jerry accepted Christ at an early age. Jerry was raised in the ministry of United Holiness and Mount Calvary Holy Church where we are today. On September 8, 1990, Jerry united in holy matrimony with Rolinda A. Murrell. Jerry was the friendly owner of Williams Grocery, the neighborhood food market. Jerry was a man of many trades and talents. He retired from American Motors/Daimler-Chrysler in 1988. Throughout his career he obtained certifications in welding. asbestos removal, carpentry, and he was also an electrician. Equipped with several skills, Jerry became an independent contractor renovating several rental properties that he owned. One of Jerry's most prized projects was designing and building a second story balcony with his wife, Rolinda. Not only was Jerry handy, but he also had a great heart. Jerry served as a caretaker for his mother, Edna Williams and his aunt, Florida "Tink" Meekins for several years. Jerry would do all their grocery shopping, accounting, and maintenance work when they lived independently. When it came to fashion Jerry was known for showing up and showing out! You could find him at the Main Event wearing the sharpest blazers and Dobbs hats. Jerry enjoyed meals with family and was known to grill the best ribs on this side of the globe! He could also cook anything from scratch as taught by his mother Edna! On Sunday afternoons you could catch Jerry watching the Packers' game and receiving a spa facial from his daughter Anisha. Jerry had several good qualities. However his greatest quality was his love for family. Jerry was a great husband, father, Papa, Uncle, brother, and friend. Jerry was always available to teach life skills and provide support to his loved ones. Jerry poured into his family. Jerry was present for birthdays, graduations, holidays, school programs, basketball games, football games, and everything in between. He would sometimes attend these events after hours of chemotherapy. Jerry provided a gentle love. He didn't have a "pushy" type of love. He respected everyone's preferences. Jerry was kind, calm, and a non confrontational man. If you asked, he would try his hardest to make it happen, If you invited him, he would make sure he was present. Although quiet and observant at times, Jerry loved to laugh and had a funny personality to match. His jokes were one of a kind and his laugh was contagious! Gerald "Jerry" L. Williams departed this life on Wednesday, November 3, 2021. Jerry was preceded in death by his paternal grandparents, Mattie and John Williams Sr.; parents, Mattie and Belve Teasley; parents, Edna and Eugene Williams Sr.; five brothers, Eugene Jr. nephew, Louis, Ernest and Lawrence Sr. one sister, Joyce Williams; two sons-in-law, Bishop Donald Corder and Yamar George Sr.: mother-in-law, Carrie Murrell; one brother-in-law, Clarence Murrell II; and one great-grandson, Niko Floyd. He leaves to cherish his memory: his loving wife, Rolinda Williams; two sons, Keith Williams of California, Mario (Trina) Williams Sr. of Texas; four daughters, Rozlyne Corder of Wisconsin, Coretia (Steven) Vaughns of Texas, Anisha (Terrence) Rhodes and Carrie of Milwaukee, WI; one sister, Jacquelyn (Willie Maben) Williams of Wisconsin; one brother, Robert (Theo) Williams, Sr. of Georgia; one aunt, Bessie Thompson of Wisconsin; six sisters-in-law, Rita Williams, Elizabeth Williams, Maryetta Williams, Robin Whitcomb, Rosa land (Anthony) Bradford all of Wisconsin, Tareena (James) Johnson of Oklahoma; two brothers-in-law, Tobe (Patricia) Murrell, Angelo Murrell of Wisconsin; a host of loving grandchildren; great-grandchildren; nieces; nephews; and friends.

The family of Mr. Gerald Leon Williams created this Life Tributes page to make it easy to share your memories.