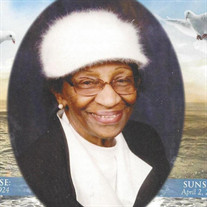 In the eyes of everyone she encountered, she could be seen in the spirit of Yemoja, Yourba Goddess of the River and Mother of all Mothers. Geraldine Elizabeth Hudnell Austin was born on June 9, 1924, in Milwaukee, Wisconsin to the late Samuel Harrison Hudnell, Jr. and Fannie Donaldson Hudnell, who came to Milwaukee from St. Augustine, Florida. Geraldine was the third of seven children. Geraldine attended 4th Street School, which is now Golda Meir and Lincoln High School. She worked at the Plankington Hotel in downtown Milwaukee and later worked at the Milwaukee County Mental Hospital where she remained until she retired at the age of 55. Geraldine enjoyed playing cards and board games. She was especially good at playing Scrabble with family and friends, and hosting Pokeno parties. She was on a bowling team, a member of Clinton Rose Senior Center, and became a member of the Roselettes Dance Ensemble which included her sister Sara, her brother Al and her dear friend Ms. Elizabeth Johnson. The Roselettes Dance Ensemble performed at various locations throughout Milwaukee. Music and dancing were her favorite pastimes. On December 29,1947, Geraldine married Square Austin in Milwaukee. She managed to balance work, being a wife and mother in order to provide a strong, solid family structure in her home. Geraldine had five children: one daughter, Nona Lee Davis; four sons, Dumah Saafir, Cecil Austin, Squire Austin Jr. (deceased) and Willie Austin; and one stepdaughter, Claudette Austin. Geraldine had 21 grandchildren: Loretta and Veronica Davis, Armando and Luis Saafir, Roxanne Kess, Ajeenah Haynes-Saafir, Debbie Peoples, Amy Austin, Jessie Austin, Janay Austin, Willie Barron, Forest Austin, Nathan Austin, Shasta Austin, Ciairra Austin, Marina Austin, Kelsey Austin, Richard Blake, Janine Harris and John Johnson; 23 great grandchildren, 2 great-great grandchildren; four daughters-in-law: Bonnie Miller, Jane Pittman, Sheri Austin, and Valinda Christopherson; and many other relatives and friends. She had two sisters, Sara Mae Anderson and Rachel Ann Harris; and four brothers, James Alfred, Earl Leon, Oscar and Samuel Harrison III, all deceased. Her son-in-law, John Davis also preceded her in death.

In the eyes of everyone she encountered, she could be seen in the spirit of Yemoja, Yourba Goddess of the River and Mother of all Mothers. Geraldine Elizabeth Hudnell Austin was born on June 9, 1924, in Milwaukee, Wisconsin to the late Samuel... View Obituary & Service Information

The family of Mrs. Geraldine Elizabeth Austin created this Life Tributes page to make it easy to share your memories.

In the eyes of everyone she encountered, she could be seen in...

Send flowers to the Austin family.