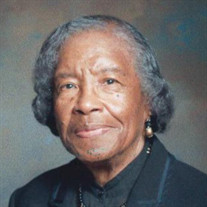 In lieu of flowers please make a donation in Gertrude Payton's name to the Payton-Price Family Fund at the Greater Milwaukee Foundation, or the Mack & Gertrude Payton Endowed Scholarship Fund at Alcorn State University in Lorman, MS. Education Pioneer Gertrude Payton Leaves Legacy When Gertrude Payton was hired to teach home economics at Roosevelt Jr. High School in 1953, she joined the ranks of pioneering African American Milwaukee Public School (MPS) educators. In the early 1950s, African American teachers were primarily hired to teach at elementary schools. Some were hired to teach electives (classes that did not count toward the credits needed to graduate from high school), but it was not common to have African American teachers in grades 7–12. A native of Crystal Springs, Mississippi, Mrs. Payton received her undergraduate degree from Alcorn Agricultural and Mechanical College (now Alcorn State University) in Lorman, Mississippi, and worked as a teacher before moving to Milwaukee, Wisconsin, in 1951 with her husband, Mack, and her daughter, Shelia, during “The Great Migration” when African Americans left Southern states to seek better opportunities in the North. Despite their degrees and teaching experience in the South, both Mrs. Payton and her husband were initially unable to get jobs in their fields of study. Her first two jobs in Milwaukee were sewing bags used to store potatoes and working in a tannery. In 1963, Mrs. Payton became a home economics teacher at North Division High School and was later named home economics department chair. She was selected to become the Title 1 Coordinator at the school and was responsible for ensuring federal dollars were properly spent to help students overcome family, social, or economic barriers so they could achieve academic success. While teaching, Mrs. Payton enrolled in UW-Milwaukee’s Educational Psychology Master’s Degree program. She graduated in 1974, became a guidance counselor, and helped students with their educational, career, and social needs so they could achieve their post-high school goals. She became a guidance counselor at West Division High School in 1976 and was later promoted to director of the guidance department. In that role she helped set the goals and tone for how the department functioned and helped counselors provide the best possible assistance to students. When MPS decided to change West Division from a traditional high school to the Milwaukee High School of the Arts, Mrs. Payton continued to manage the guidance department while serving on the team that oversaw the transition. Mrs. Payton retired from full-time work at the High School of the Arts in 1989 but continued to work part-time for MPS another 10 years. Mrs. Payton’s impact on education extended beyond the classroom through her work as an adjutant counselor at the University of Wisconsin-Milwaukee and by representing the Milwaukee Public School system on boards, committees, and curriculum projects such as evaluation of the Minneapolis/St. Paul, Minnesota, Home Economics Department for the North Central Evaluation Committee. After retiring, Mrs. Payton cofounded two endowed scholarships with her husband and family to help students attend historically black colleges and universities. They are the Mack & Gertrude Payton Endowed Scholarship at Alcorn State University and the Payton-Price Family Fund at the Greater Milwaukee Foundation. As it grows, the Payton-Price Family Fund will also provide grants that benefit Milwaukee’s African American community in areas such as economic self-sufficiency, health, innovative programs and techniques that improve educational outcomes for students of Black African ancestry, and efforts that showcase and preserve Black African arts and culture (among other things). In addition to her work in education, Mrs. Payton was active in her church—St. Mark A.M.E. Church—and in organizations that worked to make a positive difference in the lives of others. She was a member of the Christian Social Action Form Committee that hosted information sessions and discussions regarding issues impacting people’s lives in the community. She was a charter member of the church’s credit union and First Vice President and later Parliamentarian of the Geraldine Bradford Missionary Society that provided services and assistance to people in need. She also worked with young people as Vacation Bible School Director and was Chairperson of St Mark’s bicentennial celebration souvenir booklet that accompanied a diorama created and housed in the Milwaukee Public Museum. Mrs. Payton was also an organizer and charter member of Kappa Beta Zeta Milwaukee Chapter of Zeta Phi Beta Sorority; a charter member of Sarah’s Joy Chapter #8 O.E.S., Milwaukee, Wisconsin; and a member of Church Women United that presented her with their Valiant Woman Award in 2011. Other honors include recognition as a Living Legacy in the African American Women’s organization booklet, Someone You Should Know Award in 2009, presented by the A.M.E. Church’s Fourth Episcopal District, and the Shero Award presented by the Missionary Society in 2008. Mrs. Payton was inducted into the Alcorn State University Hall of Honor and Hall of Fame, and the ASU Athletic Hall of Fame as a two-sport athlete who helped lead the women’s basketball team to a championship in 1949. Mrs. Payton died peacefully in her sleep on her 95th birthday on February 16, 2022. She is survived by her daughter Shelia (Milwaukee, Wisconsin), her son Renato (Fontana, California), her grandchildren Joi (Minneapolis, Minnesota), Justin and Renee (Fontana, California), and a host of relatives and friends. She added author to her resume when she wrote A Caregivers Journey: Dealing with the aspects of Dementia in which she shared lessons learned and information about available resources while caring for her late husband. In lieu of flowers, Mrs. Payton requested a donation be made in her name to the Payton-Price Family Fund at the Greater Milwaukee Foundation or the Mack & Gertrude Endowed Scholarship Fund at Alcorn State University in Lorman, Mississippi.

In lieu of flowers please make a donation in Gertrude Payton&#39;s...

Send flowers to the Payton family.