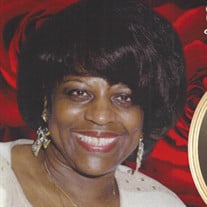 Gloria Ann Wilson (Nee Malone) was born on November 30, 1935 in Memphis, Tennessee to Fannie an6ck Wilson, Sr. She grew up as the only girl amongst four brothers, Milton,James (Buzzy), Charles (The Dap) and Jack Wilson,Jr. They protected their sister during their childhood, but she helped take care of them later in life as the last surviving member of the immediate family. Eventually, the family migrated from the south to the north. They came to Milwaukee, Wisconsin seeking a better opportunity where Gloria blossomed as a student throughout her formal education. As a teen she also found time to socialize with a group of teens called the "Lords and Ladies." They attended movies, sitting in the upper balconies where Blacks had to sit during those days, and enjoyed times at Milwaukee's lakefront. It was also during this time as a young teen, she met her future husband, Thomas Malone, who had transferred to her high school. She loved to tell the story of how one of their early meetings was at a local restaurant when her girlfriends, who had finished their meal, were in need of a ride home. There sat Thomas eating a burger and a malt by himself; outside was his father's shiny Cadillac. She asked him for a ride on behalf of herself and her girlfriends, and as they say, the rest was history. Gloria and Thomas were married on September 4, 1954, and worked hard to support themselves and their growing family. She gave birth to seven children, six of whom survived. During this time, she had the opportunity to become the first African American female to be employed by Wisconsin Bell as a telephone operator. Later on, she and Thomas helped start Malone's Realty, a dream that come to fruition during the post civil rights era in the 1970s. It not only allowed them to support themselves and their children, it allowed them to employ others within the community who had a dream of becoming entrepreneurs and, provided affordable and quality housing within the black community. Whether it was young single mothers, seniors on a fixed income, or families who could not find quality housing elsewhere, Malone's Realty was a fixture in the inner city of Milwaukee. It provided a source of inspiration and a needed resource for those who cried for justice for Blacks in Milwaukee. She also supported her husband during his tenure as local president of the NAACP. She worked just as hard at home as at the office; she raised six kids in the inner city of Milwaukee and, later on, the Malones became one of the first black families to integrate the suburbs of Brown Deer and Fox Point. She instilled within us the need to become educated beyond high school, the way her and my father had done. Although they obtained real estate licenses and not college degrees, they always made it clear that education was one of the components to making a successful life. It is in part because of her influence that amongst her children there are bachelors, masters and law degrees. She proudly earned those degrees right along with us. Above all, it was her faith that helped her survive the ups and downs of her life and the challenges of this world. Jesus was her rock in a weary land. For many years the family attended and, for a season, were actively involved at Calvary Baptist Church. Later in life, when it became difficult to attend church, she continued to tithe and receive teachings from local churches such as New Creation Church, New Testament Church, Northside Church of God and others. She attended our youth events such as basketball games, piano recitals, college musicals, graduations and other events. She cheered us on along the way. When she could, she enjoyed reading good books and newspapers (not a huge believer in the online versions since she felt they left some things out), would attend summer festivals and other musical outings. She loved spending an August afternoon with some of her high school friends at an event called Walnut Street Days, where they would gather and reminisce about the adventures they engaged in while young growing up in Milwaukee in the 1950s. Being an eloquent speaker, her friends would often refer to her as the "Oprah Winfrey" of her day. Any social gathering became more interesting once she became a part of it. She enjoyed Black Gospel, contemporary Christian music and the Motown sound (especially Smokey Robinson!l). She had her opinions, and she loved a spirited discussion. She made the most of her life and, although she did not get to fulfill the earthly dreams she had for herself, she never stopped caring for her family. Gloria Ann Malone made her transition on November 26,2020. She was 84 years old and lived most of her life in Milwaukee. She was predeceased by her husband, Thomas D. Malone, who died on July 19.2017. She will be sorely missed by her family and friends. She will never be forgotten and will live on in the lives of her children, Thomas Jr. (Deborah), Calvin (Mary), Sandra, Kathryn, Terrance (Connie) and Jack, along with a host of grandchildren (Eliot, Erin, Glenna, Thomas, Nora, DeAndre, Calvin, Angela, Devon, Cameron and Allen), great grandchildren and friends.

Gloria Ann Wilson (Nee Malone) was born on November 30, 1935 in Memphis, Tennessee to Fannie an6ck Wilson, Sr. She grew up as the only girl amongst four brothers, Milton,James (Buzzy), Charles (The Dap) and Jack Wilson,Jr. They protected their... View Obituary & Service Information

Send flowers to the Malone family.