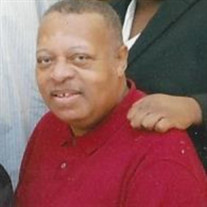 Guy Alexander Brown Sr. was born on September 13, 1948 to the union of Freddie Brown Sr. and Willie-Mae (nee Fizer) Brown in Jackson, MS. Guy confessed his faith and belief in Christ at an early age. He was a member of Mt. Nebo Missionary Baptist Church under the leadership of Reverend Fred B. Black. As a young child he attended Sunday School and was first baptized. He began his formal education in the Jackson Public Schools System where he attended Isabele Elementary School. In March of 1959, at age 11 his family moved from Jackson, MS and drove through a blizzard to arrive in Milwaukee, WI. It was the first time he had seen snow. The family joined Shiloh Missionary Baptist Church under the leadership of Reverend L.D. Bell. He continued his formal education in the Milwaukee Public Schools System where he attended Rooselvelt Middle School. In 1967 he graduated from North Division High School. Additionally he continued his post-secondary education at Milwaukee Area Technical College where he completed coursework in various studies. He was employed as a machinist at Harnischfeger Corporation for a number of years. Guy returned to Milwaukee Area Technical College and completed a technical diploma program to become a Certified Nursing Assistant. He worked in various nursing homes and facilities including St Camillus campus. Guy continued his work in healthcare and worked as a Transportation Driver for Mount Castle corporation, Wilders Transportation, and then at Bell Therapy until his retirement in 2010. On June 14, 1969, Guy was united in holy matrimony with Fannie Estella Conner. This union produced three children - two daughters and one son. Years later he joined his family in membership at New Covenant Missionary Baptist Church under the leadership of Dr. F. L. Crouther. He was also baptized again as a symbol of rededication. At New Covenant he enjoyed Sunday School and proudly worked with the Security team and as a van driver. Guy felt his ministry was to help others in any way he could. He took great pride in being able to give rides, visit the sick and shut in , and had a great respect for the mentally ill. Guy touched the lives of many. He had an amusing sense of humor. His smile and laughs were infectious and left a lasting impression on all he met. He loved cooking and grilling out and was known for his large pots of beans with that good pot liquor and his ribs were so good you didn't even need barbecue sauce. Guy had his own unique flair and style of dress. He enjoyed ordering fine shoes and suits and was most notably known for wearing his pinch fedora hats with a feather in the brim. You very seldom caught him out without his hat. Guy had many interests. He was passionate about all kinds of music which ranged from Sade and Marvin Gaye to the Jackson Southernaires. He loved cars and driving, fishing, gardening. Additionally he enjoyed watching all kinds of sports, westerns, and reruns of Hart to Hart and Columbo. Guy was an avid learner. He loved reading the newspaper everyday and watching documentaries. Guy peacefully departed this life on Sunday, January 10, 2021. His presence will definitely be missed by all of his dear family and friends. Guy was preceded in death by Freddie Brown Sr, father; Willie-Mae Brown, mother; Anne Lee Brown, sister; Freddie Brown Jr, brother; MacArthur Spain, brother- in- law; Levon Taylor, brother- in- law; J.C. & Mary Sullivan, brother and sister- in- law; Anderson Conner, brother-in-law; Theotis Conner, brother-in-law; and Robert Conner, brother-in-law. He was also preceded in death by his crew who were near and dear to his heart- Freddie Brown Jr, brother; Green Fizer, cousin; Eddie Fizer Jr, cousin; Johnnie Fizer, cousin; Levon Taylor,brother- in- law; James Moton, cousin; John Ike Moton, cousin; George Sephus, cousin; Carlvester McClain, cousin; Tommie "Toby" Tolbert, friend; and Lonnie Tolbert, friend; He leaves to cherish his memory Fannie Estella Brown, devoted wife of 51 years; their children Stephanie Brown, Shelley Brown, Guy(Michelle) Alexander Brown II; one sister Leonia Spain; Brothers-in-law; Willie James (Solomia) Conner Jr, Charles (Linda) Conner, and Forrest (Denise) Conner; Sisters- in- law; Emma Jean (Lee) Anderson, Elizabeth (Charles) Williams, Geneva (William) Moore, and Patricia (James) McCants; two beloved aunts Agnes Parker and Lealer Moton; two special sons Jaukii Marion and War Nakula Reginald Marion; a host of grandchildren, great grandchildren, family, and friends. Guy was crazy about his family - immediate and extended- and held a special place in his heart for his cousins, nieces, and nephews. , or

Guy Alexander Brown Sr. was born on September 13, 1948 to the union of Freddie Brown Sr. and Willie-Mae (nee Fizer) Brown in Jackson, MS. Guy confessed his faith and belief in Christ at an early age. He was a member of Mt. Nebo Missionary... View Obituary & Service Information

The family of Mr. Guy Alexander Brown, Sr. created this Life Tributes page to make it easy to share your memories.