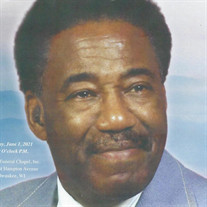 HAROLD MASON, SR. 1928 - 2021 Harold Mason, Sr., affectionately nicknamed "Billy," was the youngest of five children born to the union of James Fillmore and Naomi Mason. He was born on September 8,1928 in Milwaukee, WI. Harold received his formal education at Fourth Street School. He professed a belief in Christ at an early age and united with Calvary Baptist Church. Harold was a member of the choral club, sometimes singing solo selections. He was a proud graduate of Lincoln High School. As a young man Harold worked at the Milwaukee Journal. He joined the United States Army in September of 1952 enlisting and training as a cook. However, he was reassigned to clerical duties once it was discovered that he could type. He served for two years achieving the rank of corporal and being awarded medals for occupational and national defense service. When he returned home to Milwaukee, Harold had aspirations of becoming a plumber but the laws of the city at that time prevented Negroes from practicing the trade so instead he became a licensed barber. He attended Milwaukee Area Technical College and honed his craft as an apprentice under the tutelage of Mrs. Leota R. Terry who was the proprietor of Kings' Barbershop, and a longtime friend of the Mason Family. Harold met the love of his life, Mary Helen (nee Cross), while using his talents in the community to cut hair at the Veterans Administration hospital. Mary was a health aid there and Harold was immediately struck by her beauty, often recounting that she wore a uniform dress with the prettiest legs he had ever seen. They married in 1964, and created a family consisting of four daughters and one beloved son. He insisted on quality education for his children, their children, and encouraged everyone he knew to discover self-fulfillment while being able to support themselves and their families. In 1968 Harold and Mary purchased a mixed-use commercial and residential building on Teutonia Avenue, and Mason's Barber Shop was established. It became a beacon of stability for Milwaukee's African American community. Harold welcomed Milwaukee's Black luminaries side-by-side the city's common folks and he treated them all warmly with dignity, love, respect, and a dollop of humor. Harold became an ordained deacon circa 1974 and served in this capacity until he was bestowed the title of deacon emeritus in recognition of his faithful service to Calvary Baptist Church. In loving service, Harold would cut hair and serve communion for the sick and shut-in and drive the church bus on occasion. Harold also continued to use his wonderful voice in service-it was often said that Deacon Mason could "sing the birds down from the trees!" Harold was truly living history. He would often tell anyone who would listen, "I'm going to live to be 150 years old, or die trying." He was born during the Great Depression, then lived to experience fourteen additional recessions. In the 1930s he contracted then overcame polio. Harold opened his barbershop despite redlining and other discriminatory practices of the 1960s, then thrived for more than forty years. In fact, the race riots of 1968 occurred just days after he opened yet, as a soul brother, his barbershop was one of the only buildings left untouched. True to form, Harold marched with Martin Luther King, Jr. when he came to Milwaukee in 1964, and with Father Groppi during the housing protests of the 1960s. In the 1970s, he helped to begin the desegregation of Milwaukee's Sherman Park neighborhood. Harold went on to eternal life with his Lord and Savior Jesus Christ on Sunday, May 23rd, 2021. He was preceded in death by his wife, Mary; his siblings Mary Louise Mason, Marian Bailey, Edna Brown, and James Mason; and his daughter Cassandra Chambers. He leaves to cherish his memory: four children - Catrina Mason Powers, BilliJo Mason Saffold, "Jamil" Harold Mason, Jr. "Jimmy," and Leota Mason Trammell; 13 grandchildren, 6 great grandchildren and a host of nieces, nephews and treasured loved ones.

HAROLD MASON, SR. 1928 - 2021 Harold Mason, Sr., affectionately nicknamed "Billy," was the youngest of five children born to the union of James Fillmore and Naomi Mason. He was born on September 8,1928 in Milwaukee, WI. Harold received his... View Obituary & Service Information

The family of Mr. Harold Mason created this Life Tributes page to make it easy to share your memories.

Send flowers to the Mason family.