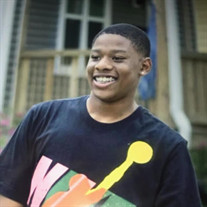 Jalen Devon Gross was born to LaMeesha Beamon and Darwin Gross on August 27, 2002. He loved his family dearly because family was his first love. He was outgoing, caring and he constantly put the needs of others before himself. Whenever he put his mind to a task, he was determined to succeed or win, especially with basketball – his second love. His faith in God is what made Jalen believe he could do anything he wanted to. He believed “he could do all things in Christ,” Philippians 4:13. Jalen was a member at Incarnation Lutheran Church where he worked for the youth program. He volunteered as camp leader each summer and he worked at Rocky Rococo’s. He worked hard alongside his grandmother Margo at DSM Specialty Foods where he served as an Assistant Blend Pack Operator. He began kindergarten at Milwaukee College Prep and he later attended Parklawn Assembly School and he ended his middle school years at Milwaukee College Prep. Jalen attended Milwaukee Lutheran High School for three years and he graduated from John Marshall High School. Jalen had a great love for basketball. Each year his skill on the court would improve. He worked hard to perfect his craft, and would often work out with this trainer and role model Troy who played basketball overseas. On Saturdays, you would find Jalen, his brother, cousins and friends on an area basketball court. The late Kobe Bryant was Jalen’s role model and it was Bryant who once said, “It’s the one thing you can control. You are responsible for how people remember you – or don’t. So don’t take it lightly.” Jalen didn’t take this lightly – he was a role model, and his legacy will live out in the hearts and souls of those who loved him. He took his job as a son, grandson, big brother, cousin and friend seriously – his best friends were his siblings and cousins. He was an inspiration and light to all those he encountered and his big smile and sense of humor could brighten any room he entered. Although he wore the number four while playing for John Marshall High School, Jalen’s favorite basketball number was the number five. He wore the number five as often as he could – it signified his love for his mother because she called her children her Fave Five. A scholarship to “All American Showcases” will be named in Jalen’s memory for recipients who otherwise may not be able to attend in addition an award that will be given out at each camp for the player who shows the most passion for the sport. On Saturday, May 22, 2021 Jalen departed from this life doing the thing he loved most – playing basketball. Jalen will be deeply missed. He was preceded in death by his great grandmother Lovell Beamon; great grandfather, Albert Beamon; great grandmother Deloris Haslem; grandfathers, Robert Gross and Jeffery Pickett; uncle, Quentin Gross and cousin Sidney Beamon. Jalen leaves to cherish him memory his loving mother, LaMeesha Beamon and his devoted father Darwin (Tina) Gross; siblings, Janiya Carter, Jayliee Beamon, Jayceon Beamon, Jason Carter, Nahsier Gross, Kameron Gross, Jordan Gross, Kayla Gross and Amariana Gross; grandmothers, Darlean Gross, Margo (Troy) Dawson; grandfather Marvin Beamon; aunts, Candice Sibley, Myosha Beamon, Niesha Beamon, Latoya Meredith, Rhonda Tarrant and Toynessia Gross; uncles, Ahmad Rashad Gross, Jeffery Pickett, Marvin Beamon, Kenneth McKinely and Kenny Pickett; godfather Demetrius Daniels and a host of great aunts and uncles, cousins, other relatives and friends.

Jalen Devon Gross was born to LaMeesha Beamon and Darwin Gross on August 27, 2002. He loved his family dearly because family was his first love. He was outgoing, caring and he constantly put the needs of others before himself. Whenever he put... View Obituary & Service Information

The family of Jalen Devon Gross created this Life Tributes page to make it easy to share your memories.

Send flowers to the Gross family.