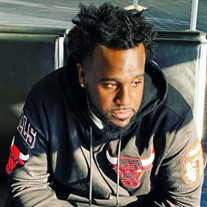 Jarnaul Javon Jones was born on July 7, 1986, to Derrick A. Jones and Linda Hall in Chicago, Illinois. He later moved to Milwaukee, Wisconsin, with his mother and younger brother. Jamaul attended high school at Walter Lutheran and Bogan High School in the Chicagoland area before attending Milwaukee Lutheran High School, graduating in 2005. He was a machinist by trade, Jamaul loved working with his hands. He had a dream of owning a transportation company, but fixing cars was his specialty, and he did it all with a big smile and infectious laugh. In his leisure, he enjoyed football, he was a huge fan of the Chicago Bears. Jamaul was a defensive tackle on his semi-pro football teams, the Lake Geneva Generals, and the Wauwatosa Spartans. He was always ready to give a helping hand or an encouraging word. Jamaulloved spending time with his family. He will be missed immeasurably. Known as a "good samaritan" at his death, Jamaul was so much more. He was a beacon of light to anyone who knew him. Psalm 23:4 "Even though I walk through the valley of the shadow of death, I will fear no evil, for you are with me; your rod and your staff, they comfort me." Jamaul Javon Jones departed this life on September 26,2021, at the age of thirty-five; he died from a hit and run accident. He was predeceased in death by his grandmother, Lee Affie Jackson; and grandfather, Jerry Fisher. He is survived by his father, Derrick A. Jones; wife, Daphne; mother, Linda Hall (Jackson), and her husband, Clyde. From the beginning, his dad called him his "main man," while he was always his mom's "Teddy Bear." His good-hearted, compassionate spirit will be cherished forever in the lives of the most important people in his life, his children, Jordyn and Jakel (Duke); grandparents, Lelia and Robert Jones; brother, Andre; and a host of uncles, aunts, cousins, and friends Everyone deeply loved Jamaul. He was a loving dad, caring brother, and faithful friend. He was the oldest of over twenty first cousins, he freely gave a helping hand to anyone who needed it. We will always love and miss you, Jamaul.

Jarnaul Javon Jones was born on July 7, 1986, to Derrick A. Jones and Linda Hall in Chicago, Illinois. He later moved to Milwaukee, Wisconsin, with his mother and younger brother. Jamaul attended high school at Walter Lutheran and Bogan High... View Obituary & Service Information

The family of Mr. Jamaul Jones created this Life Tributes page to make it easy to share your memories.

Send flowers to the Jones family.