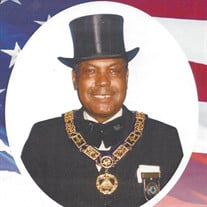 Jamie (James) McKee was born January 1, 1923, to Nettie and Thomas McKee in Cleveland, OH. He and his family moved to Milwaukee when he was 6. He received his education in the Milwaukee Public Schools (MPS). Jamie joined the Army Air Corps in March 1943 and was honorably discharged in 1946. In the Army Air Corps (now known as the Airforce) he was part of the Redtails and fiew a P51 bomber escort plane during WWII. Jaime was the first African American Deputy Sheriff for Milwaukee County. He was a trailblazer within the department for many years and retired with honors. After leaving the Sheriff's office he worked for the Milwaukee County Park and Recreation Dept until his retirement. He was a member and a Past Master of the Corinthian Lodge #5. He served and worked diligently for many years in is Lodge in many capacities. He was an active member of the Ionic Consistory for 69 years. He was elected Grand Inspector General 33 in the United Supreme Council, Ancient and Accepted Scottish of Freemasonry, PHA Northern Jurisdiction, USA. Jamie was Past Grand Master of the Most Worshipful Price Hall Grand Lodge Free and Accepted Masons of the Wisconsin Jurisdiction. He was a member of the Zembo Temple #70 Ancient Egyptian Arabic Order Noble Mystic Shrine of North and South American and its Jurisdiction, Inc. He was the creator and Captiain and was responsible for organizing the small patrol for the parades and competitions. As a result of his tremendous leadership in Zembo Temple the small car patrol won several awards. Jaime attended Grace Fellowship Church under the leadership of Rev. Andrew Calhoun. Jamie enjoyed telling stories, hunting, fishing, and spending time with his family and friends. Jamie was called home on Sunday September 19th, 2021. Jamie was preceded in death by his parents, Nettie and Thomas; brothers, Wille, Curtis, Tommie Lee, Brenson (Lula), and Benjermin; sisters, Louise and Mary Alice; and nephews, Brenson Jr., Larry Daniels, and Gregory Daniels. He leaves behind to cherish his memories: daughter, Sheila McKee; his grandchildren; nephews, Royce McKee, Bruce McKee, Tyrone Daniels, and Terry (Crystal) McKee; nieces, Monique McKee, Brenda McKee, and Tujuanna McKee; and a host of cousins and dear friends.

Jamie (James) McKee was born January 1, 1923, to Nettie and Thomas McKee in Cleveland, OH. He and his family moved to Milwaukee when he was 6. He received his education in the Milwaukee Public Schools (MPS). Jamie joined the Army Air Corps... View Obituary & Service Information

The family of Mr. Jamie McKee created this Life Tributes page to make it easy to share your memories.

Send flowers to the McKee family.