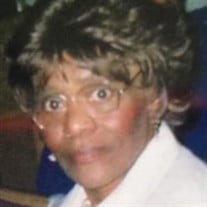 Janet Louise Higgins, 83, entered Heaven Sunday, October 31, 2021, from Glendale Care and Rehab Center. Janet was born on April 9, 1938, in Beloit, WI to Thomas Buggs and Eva Bowers Buggs. Janet married Louis “Buster” Higgins on September 24, 1960, in Beloit. To this union one daughter, Eva Diane, was born. Janet attended Beloit Public Schools, graduating from Beloit Memorial High School in 1956. She moved to Milwaukee in 1958 and began her family. Janet believed in the Lord Jesus Christ and became a member of Greater Mt. Sinai COGIC in Milwaukee after her retirement. Janet had a calling for helping and caring for others. She worked in Labor/Delivery and Women’s Health for 40 years at Aurora Sinai Medical Center in Milwaukee retiring in 2001. Janet enjoyed her family more than anything else. Her favorite term of endearment for her nieces and nephews was “Honey”. She would talk about her love of Beloit to anyone that would listen. Janet never missed her BMHS Class reunions. She was a regular attendee of the Bi-Annual Back to Beloit: An African American Homecoming reunion. Janet was overjoyed with the 2009 election of “Her President”, Barack Obama. She received a calendar in his honor for Christmas ever since and saved them for future generations to learn about him. Janet was an avid Green Bay Packers fan and called her brothers regularly about the games. Her favorite player was LeRoy Butler whom she had the pleasure of meeting and received an autographed jersey from. Janet enjoyed traveling to visit friends and family. This was the only time she wanted to get up early. She also loved animals, especially dogs, almost as much as she loved her family. Janet is survived by her brother John (Elizabeth) Buggs; Sisters in Law, Shirley Buggs and Charlene Buggs; Nieces and Nephews: Pamela Royal, Lisa Buggs, Kevin Whitehead, Kerwin (Debra) Tate, Donna (William) Matlock, Leslie Bridges, Phyllis McClarty, Shvon Clayton (Gary), Stacey (Nathaniel) Lindsay, Gayle (Timothy) Listenbee, Nicola (Anthony) Daniels, Frederick Buggs (Susana Hernandez), Amber (David) Applegate and Johna Buggs. Numerous great and great great-nieces and nephews. Janet also leaves specials friends, Gina (Johnny) Winters, Gloria (Newton) Garraway, Angela (Michael) Peavy, the Weaver families, and many, many friends, and co-workers with amazing memories. She was preceded in death by her husband Louis; daughter Eva Diane; her parents; brothers, Thomas, Fredrick, James, Donald Buggs and sister-in-law Loria Buggs, along with many other family and friends. The Family wishes to thank the staff of Glendale Care and Rehab Center; Horizon Home Care Hospice especially Ms. Aretha Franklin (yes, her real name) who was with Janet in her final hours and Pastor Charles E. Fair, Saint James Community Mission Church. In lieu flowers, donations can be made to the American Diabetes Association at www.diabetes.org. Northwest Funeral Chapel 6630 W. Hampton Ave. Milwaukee, WI 53218 is assisting the family. Share memories at northwestfuneralchapel.com.

Send flowers to the Higgins family.