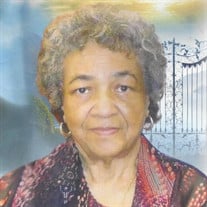 Mrs. Joan Leflore was born on April 10, 1934, to the union of Beuford and Grace Holloway in Milwaukee, WI. Joan was the first born and last living sibling. Joan passed away peacefully in her home surrounded by loved ones on Sunday, November 7,2021, at the blessed age of 87. Joan received her formal education through the Milwaukee Public School System. She accepted Christ at an early age and faithfully attended Yeshua Fellowship Church where she received spiritual worship and guidance from her nephew, Pastor Chuck Holloway. During the pandemic she enjoyed watching him on her Ipad gifted to her by her children and grandchildren. In 1973 Joan was united in Holy Matrimony with Abraham Leflore in Milwaukee, WI. Before their union she was blessed with four children: Mary Ann, Michael, Keith Sr and Jerry Holloway, all of Milwaukee, WI. Joan took pride in being a Homemaker, She was a woman of many talents. She taught her grandchildren how to plant, grow, and cook food from the qarden in her yard. She also was a handy woman who could repair and refurbish anything. She began babysitting at a young age. After raising her own children, she babysat and helped raise her grandchildren and the children of anyone who needed her. She made sure the children she cared for came home from school to a clean house and food on the table. Joan enjoyed spending time with the children, teaching them to cook, clean, and explore their talents. She allowed the children to do her hair, makeup, manicures, pedicures, and she even ensured they had the tools they needed when she recognized their areas of interests. Joan was known for providing her grandchildren with the best gifts that their hearts desired. Joan made sure her family spent time together while hosting cookouts, Sunday and Holiday dinners, annual family outings to State Fair and the Milwaukee Public Zoo and let's not forget talent shows in her backyard for her grandchildren. In her leisure time she enjoyed shopping, especially at Walmart, music, the latest technology from radio Shack to As Seen on TV, taking pictures, videography, cooking, sewing, watching her grandchildren play, and talking on the phone about everything. Joan also loved playing pranks on her family and friends. In her later years, Joan became a member of the Walnut Street Social Club and often spent time socializing with her brother Chuck at First Fridays. Joan was preceded in death by her husband, Abraham Leflore; parents, Beuford and Grace Holloway; Children, Michael and Mary Ann Holloway; Grandson, Antoine Taylor; Brothers, Bobby, James, and Charles Holloway; Sisters Delores Hervey and Jean Shedd (Peter). Our beloved Joan Leflore leaves to cherish her memory: Children, Keith Sr. (daughter-in-law Loretta) and Jerry Holloway; Twelve grandchildren; Maurice, Shonda, Gary, Randell, Tangelo, Sonya, Keith Jr., Kenneth Sr.. Letitia, Leatrice, Octavibus, and Darenda; 33 great grandchildren; 7 great-great grandchildren; and a host of nieces, nephews, cousins, friends, and extended family.

Mrs. Joan Leflore was born on April 10, 1934, to the union of Beuford and Grace Holloway in Milwaukee, WI. Joan was the first born and last living sibling. Joan passed away peacefully in her home surrounded by loved ones on Sunday, November... View Obituary & Service Information

The family of Ms. Joan Leflore created this Life Tributes page to make it easy to share your memories.

Send flowers to the Leflore family.