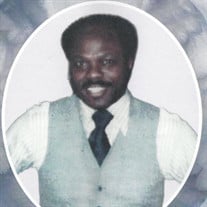 A TIME TO BE BORN Joe Louis Perkins was born on December 4, 1936, to the union of James and Berthola Perkins in Little Rock, Arkansas. Joe was the fourth of thirteen children. He received his elementary through high school education while attendinq the Sherrill, Arkansas School District. Soon after moving to Milwaukee, Wisconsin, he attended Milwaukee Area Technical College. A TIME TO PLANT Joe accepted Christ as his Savior at an early age and became a member of New Salem Missionary Baptist Church in Sherrill, Arkansas. After moving to Milwaukee in 1956, he joined Mount Zion Missionary Baotist Church where he served faithfully as a deacon, Sunday school teacher, Sunday school superintendent. and a Youth Department coordinator. Joe was also a member of the Chancel Choir, the Male Chorus and served on the Laymen Board. In 1959, he was united in holy matrimony to Claudine Bryant. is union was blessed with three children: Joyce, Vernita and Jerome. In the' early years of marriage, Joe and Claudine owned and operated a neighborhood cafe. After the passing of Claudine in 1969, Joe made a career change that allowed him time to provide stability and guidance for his children. In 1978, Joe married Sherrion Dotson. They were blessed to celebrate 42 years of marriage. Joe retired in 1997 from Tower Automotive formerly known as A.O. Smith. In his leisure time, Joe enjoyed gardening and keeping an immaculate yard. He was also an ardent sports fan. His favorite teams were the Los Angeles Lakers and the Los Angeles Dodgers. Joe also enjoyed hosting family gatherings. A TIME TO DIE Joe departed this life on November 12, 2021 . He was preceded in death by his parents: James and Berthola Perkins; brothers, Bonnie, Floyd, James Jr.; Ernest. Jessie and Lawrence; and sisters, Irene Page, Beulah Brown and Doris King. He leaves to cherish his memory: his loving wife, Sherrion Perkins; children: Joyce Perkins, Vernita (Babatunde) Otukoya, Jerome Perkins; grandchildren: Ducne Perkins, Jerome Perkins Jr.. Jamara Barnett, Claudine and Babatunde Otukoya Jr., sisters: Anne and Eva Perkins of Flint, Michigan, and Helen Perkins of Pine Bluff, Arkansas; and a host of nieces, nephews, and other relatives and friends.

A TIME TO BE BORN Joe Louis Perkins was born on December 4, 1936, to the union of James and Berthola Perkins in Little Rock, Arkansas. Joe was the fourth of thirteen children. He received his elementary through high school education while attendinq... View Obituary & Service Information

Send flowers to the Perkins family.