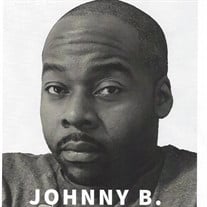 Today, we mourn the loss of a beautiful, artistic human, father, son, brother and friend. He was born to Nanette Lyons and Johnny B. Jones, Sr. in the small town of Mount Vernon, Illinois, but grew up and spent the remainder of his life in Milwaukee, Wisconsin. He attended Milwaukee High School of the Arts and Pulaski High School; however, completed his high school education at Milwaukee Area Technical College (MATC). His love to create with his hands led to his enrollment in the welding program at MATC, but he later decided it was not the right fit. His personal interests ran the creative spectrum. He loved music, specifically hip hop and R&B, artists, and songs spanning the 90s and early 2000s. He enjoyed a life-long passion for art, sketching and illustrations. He loved to cook and worked as cook at many well-known local restaurants and event venues in Milwaukee, Wisconsin such as: iPic Bayshore, The Italian Community Center, Potawatomi Hotel & Casino and The Pfister Hotel. He created and saved many of his recipes. Johnny also loved gaming and collecting movies. His movie collection gives way to nostalgic memories of searching the movie aisles at Blockbuster on a Friday night. It's a collection that made him proud and that he would add to every time he had the opportunity. He was also a secret pet lover. You would never know unless you visited him at his home. He leaves behind his beloved dog Kaydoe and cat Oreo. He was a doting father who enforced the rules, but always gave in and spoiled his daughters. He was a girl dad. As he was the youngest sibling, he often played the little, big brother role to his sister Pam. She, in turn, often reminded him of her seniority and jokingly that she was the good looking one out of the two of them. Separated by three years and a day, those who know them, know that they have an unbreakable bond. He is survived by his mother Nanette Lyons, his sister Pam, his three daughters: Sumayah, Johnae and Brooklyn, his fiance Shatarra Bates, his two stepchildren Dria and Jay as well as his extended family and an abundance of friends. He is preceded in death by his father Johnny B. Jones, Sr., paternal grandparents Rutha Mae Johnson and Willie Jones, Sr., paternal aunt Delorise Jones, and his son Donnell Xavier Jones. To say Johnny will be deeply missed is an understatement.

Today, we mourn the loss of a beautiful, artistic human, father, son, brother and friend. He was born to Nanette Lyons and Johnny B. Jones, Sr. in the small town of Mount Vernon, Illinois, but grew up and spent the remainder of his life in Milwaukee,... View Obituary & Service Information

The family of Mr. Johnny B. Jones Jr. created this Life Tributes page to make it easy to share your memories.

Today, we mourn the loss of a beautiful, artistic human, father,...

Send flowers to the Jones family.