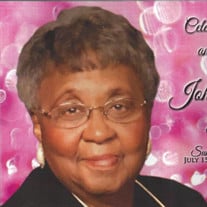 Johnnye Pearl Barnes was born in Arcola, Mississippi to Fletcher and Robbie Lee Williams Barnes on July 15, 1933. Early in her life, her parents and grandparents, Lou Emma Clark and Ed and Della Johnson, strongly instructed and encouraged Johnnye Pearl to have a personal relationship with the Lord, and to also secure as much education as possible. Pearl graduated from Arcola High School, attended Alcorn State University in Lorman, Mississippi and Mississippi Valley State University in Itta Bena. Pearl's life cast a long and wide shadow of strength and determination in the communities where she lived and worked, Her legacy reflects a display of faith in God, a love of family and community, a thirst for knowledge, a strong work ethic an advocacy for racial dignity, and a commitment to nurture and mentor young people. Beginning of Service: After teaching in Mississippi for seven years Pearl relocated to Milwaukee, Wisconsin in the early 1960 and united with Greater Galilee Baptist Church. Later, she joined New Covenant Baptist Church under the pastorate of Rev. Fred Crouther. A faithful and loyal member of New Covenant, Pearl served as chairperson of the trustee ministry, chairperson of the annual African American history month celebrations, Wednesday morning Bible study teacher, new members orientation chairperson, vacation Bible school teacher, and a member of the missionary society. Pearl had a powerful gift of connecting God's word and persuasion to practical application and living: weaving her life story as the centerpiece for answered prayer. Pearl was a nurturing mother to her biological children, Diane and Ronald, as well as a doting grandmother to Deon, Euleah, Christian, Imahni and Jarahn. She was also The Other Mother to other family members, friends, and colleagues. Pearl was known in the community for her compassionate rapport and support of children and youth, many of whom she found space in her home to provide physical and spiritual support. Throughout the years, Pearl remained in contact with many of her former students, often traveling great distances as she had become a surrogate grandmother to their children. Her motto was "Cast your bread upon water, for after many days you will find it again." (Ecclesiastes 11:1). Pearl saw this scripture fulfilled each time a youth she mentored became a contributing member in whatever community they resided. Focusing on Education: Education was important to Pearl. Following her move to Milwaukee, Wisconsin, Pearl enrolled in the teacher education program at the University of Wisconsin-Milwaukee; and upon completing the Bachelor of Science in Education, began a career as a specia1 education teacher in the Milwaukee Public School System. Pearl also earned the Masters in Special Education from National Louis University-Chicago. Pearl taught at numerous middle schools and retired in 1994 from Washington High School after 28 years of service in the Milwaukee School District. As a high school teacher, Pearl mentored countless students, helping them to see the power of their academic potential. At Washington High School she founded the Young Women's Service Club to expose young African American girls to school and community service, culture, and art-making yearly trips to sites throughout the country. Pearl's Young Women's Service Club members were hostesses for the Milwaukee Times Newspaper's Black Excellence Awards annual community celebration. For twenty-seven years, Pearl served on the committee of the Christian Business and Professional Alliance Debutante Cotillion where many young women from her high school service club were participants. Forging Ahead: Rising from a humble background, Pearl developed a strong work ethic. While teaching full time, she also worked part-time at Chapman's Department Store in Capitol Court in Milwaukee. Pearl had a sense of style and elegance in her attire as well as the ability to connect with people, which no doubt attributed to her being the first African American to be hired at the store. In her role as a summer recreational supervisor, Pearl made sure most youth in the community had a summer job. Pearl believed that the dignity of African American people should be maintained and celebrated. In her summer trips South, she would visit old plantations to learn about slavery, man's inhumanity to man, and returned to Milwaukee with renewed motivation and conviction to keep alive the worthwhile traditions and contributions that African American gave to the world. Pearl collected and published a handbook of African American proverbs in order that young people could learn the wisdom of their ancestors. While a resident at Seven Oaks Nursing facility, Pearl organized a month long celebration of African American History activities for residents, culminating in a community program featuring African American poetry recitations and music by the New Covenant Gospel Choir. Going to Her Celestial Home: On Thursday, August 5, 2021, her earthly journey completed, God sent a special angel to Beaumont Commons Retirement Community to bring His faithful servant Johnnye Pearl home to begin her well-earned celestial life. There to greet her with open arms were her daughter, Diane and grandson, Christian; parents, Fletcher and Robbie Lee Williams Barnes; and grandparents, Lou Emma Clark, and Ed and Della Johnson. She will be greatly missed by her son, Ronald (Carolyn) Barnes of West Bloomfield, Michigan; grandchildren, Deon Williams and Euleah Barnes, great-grandchildren, Imahni Williams and Jarahn Williams; special daughters, Suvisha Thomas, Roshunda Williams and Kelly (Kevin) Williams; and a host of other loving cousins and dear friends. May the work Johnnye Pearl has done speak for her!

Johnnye Pearl Barnes was born in Arcola, Mississippi to Fletcher...

Send flowers to the Barnes family.