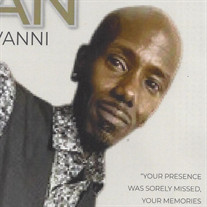 Juan Di'Giovanni Malone Sr. was born on December 20, 1979, to the parents of Beverly Ann Hawthorne and John Albert Malone at Saint Joseph Hospital in Milwaukee, Wisconsin. In his younger years, Juan received an education from Webster Middle School and North Division High School. He was taught to love God at a young age from his grandmother, Velma Kern, at Northside Church of God, where he later got married to his wife, Letitia Malone. Juan lived with chronic pancreatitis but that didn't stop him from living his beautiful life and enhancing the lives of all those around him. He enjoyed a slew of hobbies including smoking, reading, cooking of all kinds, bike riding, keeping himself and his son up on the newest video games, and playing pool just to name a few. Juan unexpectedly departed this life on Wednesday, November 17, 2021, in Arkadelphia, Arkansas to join: his mother; Beverly Ann Hawthorne, his grandparents, Velma Kern and Frank Hawthorne Sr; his great grandparents Mary Peeler and Joe Sr. his uncles Clifford Kern and Joseph Malone, his cousins Prince Ashford and Davieon Norfus, and many other loved ones. He leaves to cherish his memory: his father, John Albert Malone, his wife, Letitia Malone, his children MiaCiara (Awesome) Malone and Juan Malone Jr., his brother, Orlando (Shaena) Hawthorne, his sister, LaShona (Anthony) Lee, 32 nieces and nephews, uncles, aunts, cousins and a slew of extended family and friends.

The family of Mr. Juan Di'Giovanni Malone Sr. created this Life Tributes page to make it easy to share your memories.

Send flowers to the Malone family.