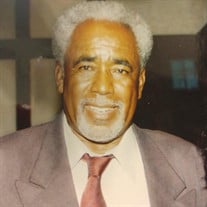 Kemphus Stephens, "Kemp", age 80, of Milwaukee, Wisconsin entered eternal life on March 28, 2021. Kemphus was born on August 24,1940 in Winston-Salem North Carolina to the union of John Atlas Sr. and Ruthel Stephens. He was raised with 7 other brothers. He confessed a hope in Jesus Christ at an early age. Kemphus also spent time in Lumberton, North Carolina. He enjoyed spending time with his family there. Kemphus worked at R.J. Reynolds Tobacco Company. He attended Hilly Branch School and Winston-Salem State University. Kemphus entered the U.S. Army in 1965 where he remained in active service until his honorable discharge. Subsequently, he married Betty Stephens on August 9, 1969 in Winston-Salem, North Carolina. The couple moved to Milwaukee, Wisconsin to start a family. Kemphus was a member of Pilgrim Rest Missionary Baptist Church. He worked for the Milwaukee County Transit System for more than 20 years. During his time as a bus driver, he showed kindness toward everyone that he encountered. Kemphus was known by many names. He was known by "Kemp", "Mr. Stephens", "Big Stephens", "Daddy", "Papa", and "Max Ivy". The name that best described him was "hospitable". He loved making Salmon patties, greens, hot water cornbread, and other food for all who knew him. Kemphus was a devoted husband, brother, father, grandfather, uncle, and so much more. In his later years, he was affectionately dubbed "The Don" by his immediate family because of his excellent ability to direct and supervise the tasks in the house. He was funny, kind, friendly, helpful, and caring. He exuded strength. Kemphus enjoyed gardening, bowling, shooting pool, playing checkers and ping-pong, watching sports, and spending time with his family. Most of all, he enjoyed the time spent with his wife, Betty. They were partners in life and now partners in the life eternal. Kemphus loved his entire family and never met a stranger. It is certain that many people will always remember the man who lived in the brick house on a corner who gave out barbecue, watermelon, and other food to those who passed by. He will remain the patriarch of his family through the memories of those who love him. Kemphus was preceded in death by his wife of 50 years Betty Stephens, parents, John Atlas Sr. and Ruthel Stephens; brothers, Tyrus, Tremus, Memphis, Dwight, and Dwaxton Stephens. He leaves to cherish his memory: daughter, Erica Johnson; son, Kerric Stephens; daughter- sisters, Jacqueline E. Byrd and Jacqueline J. Byrd-Harris (Boyce), grandchildren, Lawson Adams; Gene Johnson, Alexia Johnson, and Milania Bella; brothers, John Atlas Jr. (Endreana), Tyro (Minnie), sisters-in-laws, Connie Stephens (deceased), Jessie Bell-Hutley (deceased), Wanda Stephens; Barbara Bennett; Marilyn Stephens, Delois Stephens, brothers-in-law; Melvin (Cynthia) Nash, Nathaniel Nash, and Alvin (Jewel) Nash; best friend (Eugene Stephens), nieces, nephews, cousins, godchildren, Kamie (Jay), Jasmine, Imani, Devajanae, Joshua, Latrell, and Zyana, and a host of other special friends and family. Northwest Funeral Home has been entrusted with arrangements.

Kemphus Stephens, "Kemp", age 80, of Milwaukee, Wisconsin entered eternal life on March 28, 2021. Kemphus was born on August 24,1940 in Winston-Salem North Carolina to the union of John Atlas Sr. and Ruthel Stephens. He was raised with 7 other... View Obituary & Service Information

Send flowers to the Stephens family.