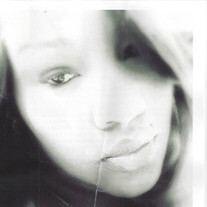 Kortni Alyse Thornton. who was affectionately known as "Mrs. Bunny" came into the world on March so, 1986 and those who were touched by her life would never be the same. The daughter of Yvette Thornton and Lacey Hill, she was born in Chicago, Illinois . .As a baby she was active and exploratory; she warmed up easily to anyone and possessed all infectious giggle and smile that would melt any heart. As a little girl Kortni relocated to Milwaukee, WI with her family and it was during this time she was baptized in Jesus name and accepted Christ as her personal savior,As she grew in Christ, she became a member of Mt. Zion Assembly Healing Temple where she had served as a Glorifier of Zion and a member of the the youth department. She was an exemplary student and attended Mt. Zion's Early View Academy of Excellence and John Marshall HS, later earning her GED. She Also attended MATC , where she earned her associates degree cosmetology She was very outgoing and easily made friends. Kortni knew the value and worth of heing a true friend. She loved being in the company of family and friends; and was often the center of attention. She worked as a cosmetologist and held various jobs throughout her lifetime, induding being a CNA. Kortni loved her work and doing for others was always in her heart and soul. Her greatest joy came from raising her three children Quenton(12), Darren (9) and Diezel(3). She took her role as mother very seriously and wanted to make sure that her sons received all of the love and affection they deserved. She was very active in all of their school events, whether it was an award ceremony or school play. Kortni was called home on Monday, November 11, 2016. She was a loving daughter, sister, auntie, niece and true friend. She will be missed on this earth by all who knew her. Her family takes relief knowing that she is with the Lord. Those left to relish in her memory are her three loving sons. Quenton, Darrien and Diezel. her parents Yvette Thornton and Lacey Hill; step-dad, Rudolph Cirton; her siblings, Korry Thornton, Heaven Thornton and Hakeem Thornton, aunts and uncles, Theresa Farmby, William Shakespeare, Terrance Harrington. Ken Thornton, Patricia Hill. Judy Hill, Anthony Hill and Henry Hill; extended family, Carolyn Lambert and Chanda Harris; best friends Sharrnayne Kyles and Kelly Broeren. In addition, Kortni also leaves an abundance of family and friends who loved her and added to the richness of her life.

Kortni Alyse Thornton. who was affectionately known as "Mrs. Bunny" came into the world on March so, 1986 and those who were touched by her life would never be the same. The daughter of Yvette Thornton and Lacey Hill, she was born in Chicago,... View Obituary & Service Information

The family of Ms. Kortni Alyse Thornton created this Life Tributes page to make it easy to share your memories.

Kortni Alyse Thornton. who was affectionately known as &quot;Mrs....

Send flowers to the Thornton family.