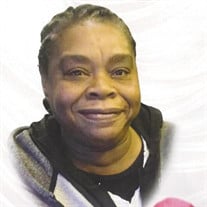 Kotelia Ann Hardison was born on January 3, 1961, to the union of Ausbey and Leota Hardison in Milwaukee, Wisconsin. Kotelia received her formal education from Victor Berger Elementary, Meineke Elementary, Parkman Junior High, attended North Division High School, and graduated from Rufus King High School in 1977. Kotelia was employed by the Milwaukee Public School System as a Food Service Cook. The best damn lunch lady ever; one that ALL the students loved. She retired after 30 years of service. In her leisure, she enjoyed a good BINGO session, slot machines at Potawatomi, and a good card game with friends and family. On warm summer days and nights, you could always catch her on the grill, or just chilling on the front steps with a cold one and some Keith Sweat. Kotelia, was better known as "Teda" or "Tillie" to her close friends and family. Teda enjoyed being the life of the party; as she would say, "It ain't a party if Teda ain't there." Most of all, she loved hanging with her granddaughter, Kayleigh and her little people (her nieces and nephews). Kotelia Ann Hardison departed this life on March 11, 2021. She was preceded in death by her grandmother, Lulious Renfro; father, Ausbey Hardison; brothers, Jeffery Hardison, Michael Hardison, and Anthony Hardison; and aunts, Alice Scott and Maxine Suber. She leaves to cherish her memory: mother, Leota Hardison; aunts, Barbara Griffin and Helen Early; brothers, Ausbey P. Hardison III and Leonard (Angela) Hardison; sisters, Elvy Davis, Barbara (jamison Sr.) Branch, and Kimberly Hardison; daughter, Alicia Anderson; son, Steven French-Hardison, granddaughter, Kayleigh Anderson; and a host of nieces, nephews, great nieces, great nephews, and friends.

The family of Ms. Kotelia Ann hardison created this Life Tributes page to make it easy to share your memories.

Send flowers to the Hardison family.